Olympic and defending World champion Omar McLeod suffered the indignity of a disqualification in the men’s 110 metres at the IAAF World Championships on Wednesday.

Another English-speaking Caribbean medal hopeful, Tynia Gaither of the Bahamas also endured a chastening performance in the women’s 200 metres on the sixth day of competition.

McLeod, who is now working in Europe with US coach Rana Reider, had been the fastest qualifier in the semi-finals, but hit hurdles eight and nine and then, terminally, 10, losing control and falling to the ground. 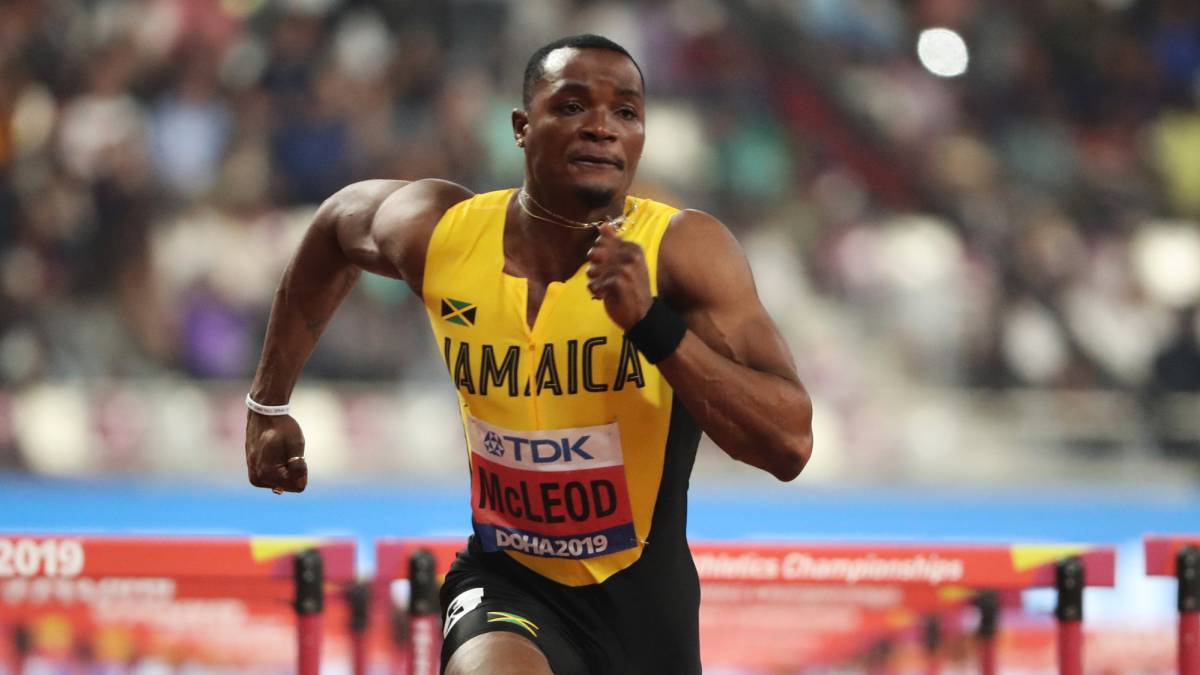 He reported afterwards that he had felt a problem in a hamstring early on, and also apologized to the IAAF Diamond League champion Orlando Ortega of Spain after careering into his path after the final hurdle as the latter was mounting a possible challenge for a medal.

“I felt my hamstring as I came off the first hurdle, so then I was thinking about it, not my technique,” he said. “It grabbed me again halfway through, but I gave it my all.

“I made a lot of sacrifices this season to get here. I showed up ready and had a heart. I’m in a new situation with a new coach. I just need to re-group and come back for next year.”

The 21-year-old Grant Holloway extended the United States’ dominance at the meet won the gold in a time of 13.10 seconds, after leading from the gun.

Sergey Shubenkov, the 2015 champion and 2017 silver medallist, chased Holloway home, adding another silver to his collection in 13.15 ahead of France’s European champion Pascal Martinot-Lagarde, who took bronze in 13.18.

The 26-year-old Gaither, the 2019 Pan Am Games women’s 200 bronze medallist, never featured in the marquee women’s event on the card which was won by Great Britain’s Dina Asher-Smith and trailed in last in a time of 22.90.

For the second time this week, Asher-Smith staked her claim as one of the finest sprinters on the planet. She followed up her silver medal in the 100 three days ago with a powerful victory in a time of 21.88 secs to clip 0.01 from the national record she set at the European Championships in Berlin 14 months ago and live up to her tag as favourite.

Out of the blocks quickly, Asher-Smith was already ahead midway through the bend, entering the straight with a two-metre margin over second-placed rising American talent Brittany Brown (22.22).

Both held their form down the homestretch, but the Briton did manage to pad her margin by another metre or so before crossing the line as her country’s seventh World champion.

Her medal was just the second in the event for Great Britain at the World Championships; the first was at the inaugural edition in Helsinki in 1983, when Kathy Cook took bronze.

Mujinga Kambundji won the battle for bronze in 22.51 to claim Switzerland’s first medal in any sprint.

Meantime, Rushell Clayton of Jamaica won the second heat of the men’s 400 hurdles to qualify for the final with the third-fastest time of 54.17.

His compatriot Shiann Salmon clocked a personal best 55.16 seconds to finish third in the third heat and narrowly failed to qualify for the championship run.

In the field events, Jamaica’s Danniel Thomas-Dodd installed herself as a favourite, qualifying for the final of the women’s shot putt with a distance of 19.32 metres. She was the only English-speaking Caribbean competitor in the field.

Lindon’s best performance of the day came in the shot putt, where he finished second with a distance of 16.24m.

In the women’s discus, Jamaicans Shanie Love and Shadae Lawrence failed to qualify for the final, clearing distances of 59.50m and 58.51m respectively.

Another Jamaican, Aisha Praught-Leer failed to reach the semifinal of the women’s 1,500m, clocking four minutes, 09.81 seconds to finish seventh in heat two of the first round.

Supermarket Assoc. not in favour of a 6pm – 6am curfew 0

Simmons: WI have to step it up to beat South Africa in Test series 0