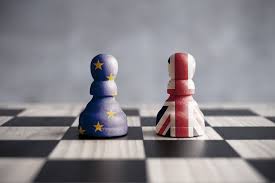 Britain’s economy appears to have tipped into recession as firms brace for the risk of a disruptive Brexit in just a few weeks’ time, according to a survey which showed the dominant services sector took an unexpectedly sharp downturn last month.

Prime Minister Boris Johnson has promised to take Britain out of the European Union by Oct 31 come what may, despite parliament passing a law ordering him to secure a new transition deal to soften the economic blow.

Against this backdrop, September’s IHS Markit/CIPS services Purchasing Managers’ Index (PMI) fell by more than any economist predicted in a Reuters poll, tumbling to a six-month low of 49.5, below the 50 level that divides growth from contraction.

Combined with even weaker manufacturing and construction surveys earlier in the week, September’s all-sector PMI sank to 48.8 from 49.7, its lowest since the month after the referendum decision to leave the EU on June 2016, and before that 2009.

IHS Markit said the figures suggested Britain’s economy shrank by 0.1% in the three months to September.

“Coming on the heels of a decline in the second quarter, this would mean the UK is facing a heightened risk of recession,” IHS Markit economist Chris Williamson said.

Britain’s economy shrank by 0.2% in the three months to June the first decline since 2012 – and a second quarterly contraction would meet the recession definition used in Europe.

On Wednesday, Johnson sent new Brexit proposals to the EU and said that unless the bloc compromised, Britain would leave without a deal at the end of this month.

Leaving the EU without a deal risks causing major disruption to trade, at least in the short term, due to the immediate imposition of new tariffs and regulatory checks at ports.

Britain’s economy is also slowing due to the trade conflict between the United States and China.

Pennywise closes 2 branches until May 23 0