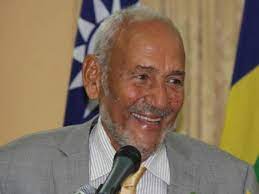 Former St Vincent Prime Minister Sir James Mitchell has been hospitalised after experiencing difficulty urinating and having some abdominal pain that he at first thought was associated with food poisoning.

The Caribbean Media Corporation said Sir James was reported to be in a stable condition at the Milton Cato Memorial Hospital where he was brought to from the northern Grenadines island of  Bequia to Kingstown, by the Coast Guard on Saturday.

Sir James told CMC by telephone on Sunday night he had taken a fall four months ago and while he suffered no broken bones, he had been experiencing some health challenges since then.

He said he had been receiving medical attention from a private facility in St. Vincent as well as being attended to by a Cuban physician who “has given brilliant service and attention” at the Port Elizabeth Hospital.

One of his daughters he started vomiting and was taken to a hospital where an ultrasound found that he had a gall bladder stone.

However, the doctors concluded that it was not an urgent matter for which surgery was required.