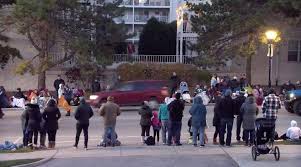 Five people have died and over 40 were injured after a car ploughed into a parade in Wisconsin.

Footage posted online shows a red sports utility vehicle (SUV) driving through a Christmas parade in the city of Waukesha, west of Milwaukee, at around 5:40pm, Police chief Dan Thompson said it hit dozens of people including children.

In a BBC report, one person is in custody.

Opposition Leader doubles down on spy accusations against Government 0