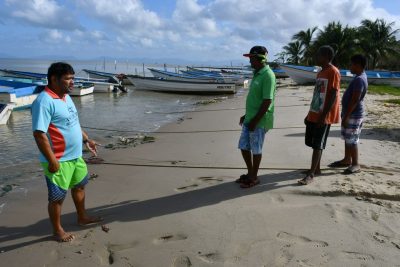 It has been eleven days since the deadly attack of the fishermen in the Gulf of Paria and today, President of the Carli Bay Fishing Association Imtiaz Khan is seeking justice. He believes that the four suspects who were arrested and charged were not working alone. Given the fact that four boats and six engines were taken during the deadly attack at sea, he believes that there are other people still responsible who have not yet been caught.

Today, two men will appear in court to answer charges of piracy, robbery and murder of the seven fishermen. The two female teenagers appeared before a Magistrate on Wednesday to face charges of robbery with violence. One was issued bail and the other will appear in court today along with the two suspects. Two fishermen are still missing at sea, but Khan admitted that it was time call off the search. He said the ‘search and rescue’ mission was an expensive exercise as it costs approximately $2000 in gas for one boat to go out into the waters. Since the attack at sea, fishermen in the area have been assisting the Police Service and the Coast Guard with their search efforts.

Following reports that Police Commissioner Gary Griffith intends to implement a marine branch, Khan said that these changes will help to ensure the safety of the fishermen, and the safety of the country’s borders. But, Khan continues to call on the Prime Minister to meet with the fishermen to discuss more ways to ensure their safety at sea. He said their issue is not a political one but stresses that Government must do what is right to ensure the safety and freedom of all its citizens, including fishermen who ply their trade to make an honest dollar. He said these changes need to be implemented as soon as possible.