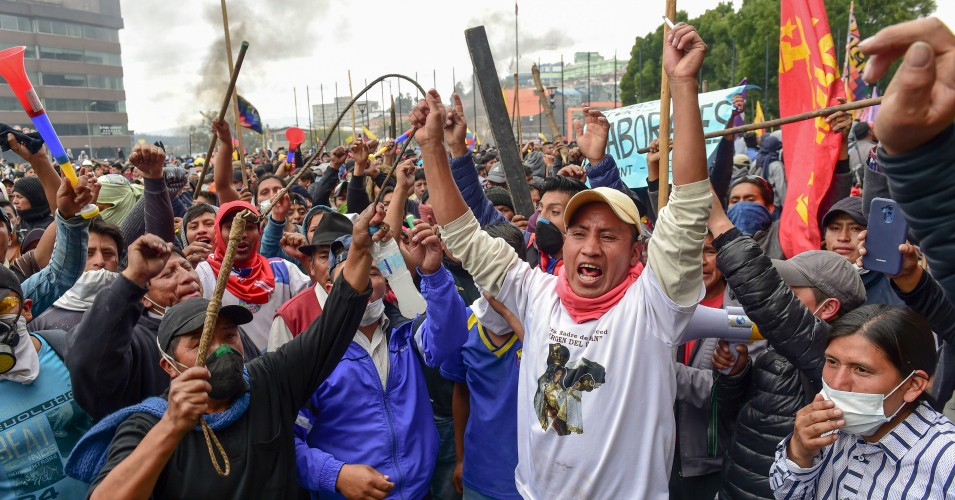 On Monday, the Confederation of Indigenous Nationalities of Ecuador (CONAIE) presented a complaint for a crime against humanity against several leaders of the Ecuadorian State, for alleged human rights violations in the framework of the demonstrations October 2019.

At the end of one of those years protests, several representatives of peoples and ancestral nationalities of the country participated this Monday in a ritual act in the capital, in the park of The Tree, the epicentre of the disturbances, to then go to the State Attorney General’s Office and formally enter the document.

The complaint It has been presented against the State and against the president of the South American country, Lenín Moreno; the Minister of Government, Maria Paula Romo; the State Comptroller General, Pablo Celi, and the general commander of the Police Hernán Carillo.

“We sue the main authorities for a crime against humanity”, typified in Article 89 of the Comprehensive Organic Criminal Code, explained the lawyer Carlos Poveda during a press conference offered by indigenous representatives in the park, in the middle of a small gathering.

In the October 2019 riots, which broke out like social protest Due to the elimination of gasoline subsidies (later repealed to pacify the country) a dozen people died and some 1,500 were injured, almost a third of them security agents.

For its part, the Government has repeatedly assured that there was no violation of human rights, and that only legitimate anti-riot measures were used and authorized by law.

Poveda stressed that for a year the State Attorney General’s Office has been asked to pronounce and investigate the deaths and injuries of members of indigenous peoples but that “a year has passed and nothing has happened.”

The president of CONAIE, Jaime Vargas warned at the press conference that, if the State does not investigate, “if they do not respond,” the movement will go to “international bodies.”

“We have declared this the month of resistance; October rebel to continue fighting from our territories. We will be to the last consequences for the persecuted, the imprisoned, the family members we lost, ”said the indigenous leader.

Loading...
Newer Post
Can you impersonate a vintage calypsonian? The THA has created a competition just for you
Older Post
Republican party installs fake ballot drop boxes in Southern California

Animal feed and table egg prices to increase from Monday 0