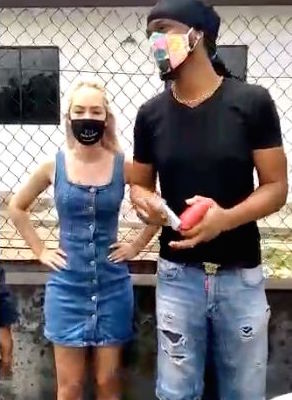 COP’s daughter threatens to sue State for stop and search

T’Shauna Griffith-Bain, daughter of Police Commissioner Gary Griffith and her husband Da Vvian Bain, have issued a pre-action protocol letter to the State, after they were stopped and searched by members of the TTPS on Easter Monday.

In separate letters to the Attorney General on Thursday, attorneys for Mr and Mrs Bain gave Faris Al-Rawi 28-days to say if the State would accept liability and a proposal for settlement.

The letters said the couple was advised that the “unlawful, negligent, egregious, oppressive and injurious actions of the officers” entitle them to general, special, aggravated, exemplary, and vindicatory damages if the matter goes to court.

The letters also pointed out that the couple received no tickets and that the incident left the couple severely traumatised. It said Griffith-Bain now feared for her safety and security and that of her family.

The two were advised that in such cases, damages are generally paid by taxpayers, but the couple gave instructions reserving their right to file proceedings against all the officers involved in their personal capacity.

The couple was driving along Rivulet Road, Couva, on Easter Monday when they were stopped in a police roadblock. They accused the officers of being aggressive, accusing Griffith-Bain of behaving in a disorderly manner, and refused to tell them why they were stopped and their car searched.

The couple wants compensation for unlawful detention, negligence, trespass to property, and trespass to person arising out of the stop-and-search they were subjected to.
Griffith-Bain was driving at the time. They said they complied with all the police’s instructions. The officers involved were named in the letters.

Three of the officers have since identified by name – PC Goinda, Sgt Badree, and WPC Francis.

Loading...
Newer Post
COVID patient who went on the run claims she was not informed of her status
Older Post
4 policemen being questioned for death of Andrea Bharatt’s accused killers

New Board of Directors appointed at the Tobago Festivals Commission 0