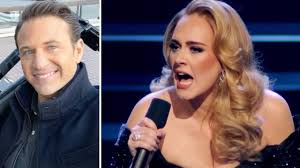 Following his interview setback with Adele Australian reporter Matt Doran wants fans to know he did not drop the ball on purpose.

Matt, who serves as one of the hosts of Channel 7’s The Weekend Sunrise, flew to London on November 4th for an exclusive interview with Adele for her album.

During the sit-down with the Grammy winner, the TV show host disclosed that he had not heard the album, apart from the lead single, “Easy on Me.”

Following the admission, per the interview was shelved, and Sony is reportedly not releasing the footage.

According to E! News, Matt blamed the mishap on an email blunder and said he’s “devastated that her fans are being denied this interview.”

Matt said “when I sat down to interview Adele, I was honestly unaware that I’d been emailed a preview of her unreleased album.”

He said he later discovered it was sent to him as an ‘e card’ link after he landed in London on the day prior to the interview.

Matt defended the incident by saying during  all of his phone discussions with Sony reps in advance, he was never told a preview copy was being made available.