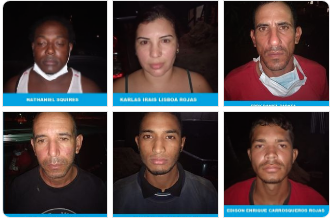 Five Venezuelan nationals and a Trinidadian man will appear before a Siparia Magistrate today, charged with breaching the Covid-19 Regulations.

JORDAN JOSE LEON ROJAS, EDDY DANIEL ZAPATA, EDISON ENRIQUE CARROSQUEROS ROJAS, and JHONATTAN JOSUE PEROZO LUGO, were charged with the offence of entering the country without exemption in breach of the Covid-19 Regulations, while KARLAS IRAIS LISBOA ROJAS, was jointly charged with Trinidadian national, NATHANIEL SQUIRES, of Couva, with aiding and abetting in the breach of Covid-19 Regulations, by entering the borders without exemption.

Squires will appear before the Magistrate in-person to answer to the charge, while the other five accused will appear virtually.

The six accused were arrested by officers of the South Western Division with the assistance of the Trinidad and Tobago Defence Force, during an exercise named ‘Operation Sea Breeze’, conducted at Bunsee Trace, Morne Diablo, on Friday 8th January, 2021.

They were placed into quarantine while investigations were ongoing.

The six were charged by PC Phillip of the South Western Division Task Force, on Wednesday 27th January, 2021.