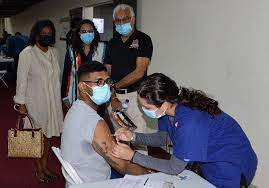 2,697 employees in the manufacturing sector get vaccinated

A total of 2,697 employees in the manufacturing sector were vaccinated on Sunday, in the first public/private mass vaccination drive.

In a partnership involving the T&T Manufacturers Association (TTMA) and the Ministry of Health, the 2,697 workers received their first jab of the Sinopharm Covid19 vaccine at the Divalie Nagar site in Chaguanas.

Speaking at the start of the drive, Health Minister Terrance Deyalsingh said this partnership will “exponentially increase the number of vaccinated persons in T&T” and assist in government reopening more sectors in the country sooner.

Deyalsingh praised the TTMA for organising the initiative, adding that they made the vaccination drive more efficient than the MOH template and that his team was now going to learn from them.

He said after the TTMA’s members use the 5,000 vaccines allotted for their first dose, the site would be used to serve other sectors such as food and beverage, which have also partnered with the ministry and been given priority access to vaccines.

TTMA president Tricia Coosal was pleased with her members’ response, saying “This augurs well for manufacturers as we believe that we are the lifeblood of the economy and we can continue to sustain livelihoods while being safe and preserving lives.”

The event was supported by the Medical Association and SEWA International TT.
Medical association president Dr Vishi Beharry claimed that medical professionals including doctors, interns, nurses and even veterinarians had volunteered to give up their weekend to assist in vaccinating citizens.