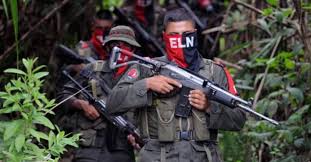 1,400 Colombian Guerrillas Are in Venezuela

Recognized as the last guerrilla in the country after the peace agreement signed in 2016 with the Farc, the ELN has some 2,300 combatants and an extensive urban support network.

Several dissident groups of the agreements with the FARC also operate in the country, including one led by the former number two of that organization, alias ‘Iván Márquez’, who, in August 2019, withdrew from the peace process to start a new rebellion called ‘Second Marquetalia’. A subordinate of ‘Márquez’ has just been captured in Bogotá.

According to Navarro these dissident groups today number “some 2,500 men in arms”.

Dissidents, ELN and drug trafficking gangs of paramilitary origin the routes to export cocaine and the income from illegal mining and extortion in Colombia are currently disputed, which is going through the worst wave of violence since the disarmament of the Farc.

Some 340 people have been killed in 85 massacres -Assassination of at least three people in the same event- so far in 2020, according to the independent observatory Indepaz,

Navarro assured that 63 soldiers died and another 215 were injured fighting these armed groups so far this year.

Since the government of former President Álvaro Uribe (2002-2010), Colombia denounces that Venezuela gives refuge to the Eln and at the time to the unarmed Farc, allegations that the Nicolás Maduro regime denies.

That regime broke relations with the Government of Colombia in February 2019, after President Iván Duque recognized the Venezuelan opponent Juan Guaidó as interim president of Venezuela. The two countries share a porous 2,200-kilometer border.

Although relieved after signing peace with the Farc, Colombia is experiencing an armed conflict that for more than half a century has faced guerrillas, paramilitaries, drug traffickers and state agents, with a balance of about eight million victims among dead, disappeared and displaced.

Bridgerton star a frontrunner for role in Black Panther 2 0