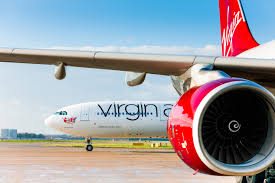 The Guyana government says the United Kingdom-based Virgin Atlantic Airline is interested in servicing the route and could possibly do so by next year.

Public Infrastructure Minister David Patterson has confirmed that he has held talks with a senior official of the airline.

“They were on a Skype call to myself and the Minister of Finance, on them coming here… This was the Director of the airline with oversight for routes. He was going into a meeting and he would like to know what is Guyana’s position, saying he would like to put Guyana on their route for 2020,” Patterson said.

US-based carriers Jet Blue and United Airlines have also expressed an interest in the Guyana market even as American Airlines is set to expand its service to Guyana from December.

While Virgin Atlantic has scheduled flights to Barbados and other Caribbean destinations, Guyana is not served by no direct airline service from any European country.

But officials here say with the country expected to begin commercial oil exploration next year, Guyana could become an interest for several international airlines.