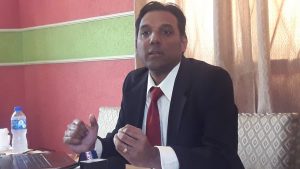 The United National Congress is condemning the PNM government’s unilateral and arbitrary declaration of two back-to-back 19-hour curfews this weekend.

According to a release from the party “This is harsh and oppressive.”

UNC PRO Kirk Meighoo wrote that “Farmers and market vendors will be hit by it especially hard, as today is Wednesday, which is the day that farmers normally harvest their ripened and ready crops in their fields.”

“These are normally taken to the wholesale markets on Wednesday or Thursday night for the Saturday and Sunday retail markets. The markets are the best place for families on a budget to purchase their fresh produce, rather than the supermarkets which sell fresh fruits and vegetables at higher prices.

Meighoo said “The unconscionable curfew hours declared by the PNM government will cause thousands of pounds of produce to be lost or to rot, with untold financial hardship to a most vulnerable group.
In addition, with the restricted hours, one can imagine the rush at the markets this weekend.”

He said “This will be a completely government-manufactured crowding of citizens, all because of these arbitrary regulations, which will force everyone to congregate in the morning in order to buy their food for the week.

“The PNM is on a dangerous power trip, and has been ever since promulgating the Public Health Regulations last year. It is apparent that the PNM enjoy the cover that covid-19 gives them to act in a completely dictatorial, oppressive and arbitrary manner. It is their dream to have complete control without any Opposition. A dictator’s dream.
While destroying the lives and livelihoods of the citizens, they loot the treasury with wild abandon, always using covid-19 as an excuse.

The UNC is now calling the PNM government out on this cynical use of the pandemic for their own dictatorial and oppressive ends.

“We call on the government to maintain the existing weekend regulations in order to allow farmers to sell their produce, give families the opportunity to buy their fresh food from the markets where produce costs the cheapest, and to avoid any super-spreader events over this weekend.

Public who utilise the Godineau River asked to exercise caution 0