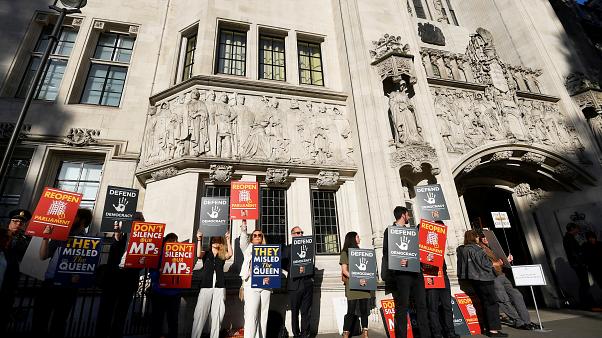 UK’s Supreme Court to Give Parliament Suspension Ruling – What Happens to Brexit?

The highest court in Britain today will make the most important decision in its history, ruling over the five-week suspension of parliament. Eleven judges were asked to determine whether the prime minister’s advice to the Queen to prorogue was ‘justiciable’ capable of challenge in the courts and, if so, whether it was lawful.

So what happens to parliament now?

If justices decide that the prorogue was not justiciable and therefore was lawful, the suspension of parliament can continue.

It will re-open on October 14th, with the Queen’s speech, giving Boris Johnson a moment of relief. If justices’ decided it was justiciable and could be legally challenged and that it was unlawful, parliament could be recalled.

That would mean MPs will be called back to Westminster with a new Queen’s Speech and State Opening of Parliament before October. 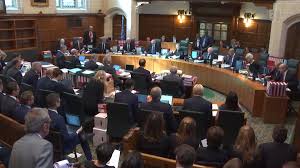 Will there be a second suspension?

Lord Keen said the PM will comply with the Supreme Court’s ruling if it concludes his advice to the Queen was unlawful. But he refused to rule out the possibility Mr. Johnson may advise the monarch to prorogue Parliament for a second time.

Documents submitted to the court revealed three possible scenarios in the event the court rules the suspension was unlawful, two of which could see the Prime Minister make a fresh decision to prorogue parliament. The other outcome could see the court order parliament to be recalled.

Will MPs return to Westminster?

Lawyers for Mr. Johnson’s opponents said Parliament should meet ‘urgently’ after the ruling, to decide what to do in the event the prorogation is declared ‘null’ by the court.

Asked shortly after the hearing ended last week to rule out proroguing parliament for a second time, Mr. Johnson said: ‘I have the greatest respect for the judiciary in this country.

‘The best thing I can say at the moment whilst their deliberations are continuing is that obviously I agree very much with the Master of the Rolls and the Lord Chief Justice and others who found in our favour the other day.’ He said, ‘I will wait to see what transpires.’

The PM has said he will ‘wait and see’ what the judges ruling is before he announces his intentions. He did, however, tell reporters in New York: ‘I have said before, I believe that the reasons for wanting a Queen’s speech are very good indeed.’

What happens to Brexit?

The panel of 11 judges at the Supreme Court was tasked with hearing appeals from two separate legal challenges to Mr. Johnson’s decision to prorogue parliament. The move to suspend for five weeks from 9 September outraged many MPs, who said it was an attempt to muzzle them at a crucial time in Brexit negotiations.

A case brought by anti-Brexit campaigner Gina Miller at the high court in London was rejected. But a case in Scotland brought by a cross-party group of MPs and peers won a ruling that the decision was unlawful because it was ‘motivated by the improper purpose of stymieing parliament’. The PM has insisted: ‘I am saying that parliament will have bags of time to scrutinize the deal that I hope we’ll be able to do.’

The Brexit deadline remains October 31st, though the opposition and rebel MPs hoping to block a no-deal exit from the EU passed legislation ordering a delay until January should a deal not be agreed by parliament by October 19th. If parliament is recalled earlier than October 14th, it gives those opposition groups more time to scrutinize Mr. Johnson’s negotiations with Brussels.

Will there be a general election?

MPs have twice rejected Mr. Johnson’s call for an early general election on October 15th, ahead of a crucial EU summit. He wanted an early election to restore the Conservative Party’s majority in the Commons.

If enough MPs support an early election, the prime minister recommends the date of the poll to the Queen. Parliament would then be dissolved 25 working days before an election takes place.

At this point, politicians stop being MPs and they campaign for re-election if they choose to stand again. With parliament prorogued, MPs would not have another chance to vote for an early election until October 14th, when they return. But if the prorogue is recalled, MPs could in theory vote for an election at an earlier date – before the Brexit deadline.