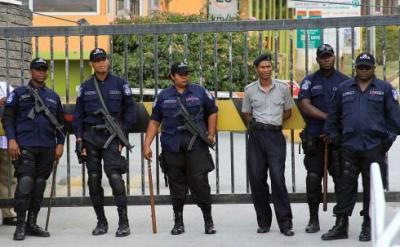 The Trinidad and Tobago Police Service (TTPS) wishes to assure the public that it has increased mobile and foot patrols around locations of banking institutions as people go about changing their old $100 bills.

Commissioner of Police, Gary Griffith says Emergency Response, Task Force and Divisional Patrols are taking place across the nine Policing Divisions, to provide greater levels of safety and comfort, as people go about transacting their business at commercial banks.

Commissioner Griffith’s assurance comes as concerns are being raised by members of the public about long lines outside banks, where customers are seeking to turn in the old bills for the new $100 notes.

The CoP says the TTPS is aware that criminal elements may want to target unsuspecting persons in the lines at banks, and he is giving an assurance that police officers are out in full force to safeguard members of the public, as they go about transacting their business at various commercial banks.