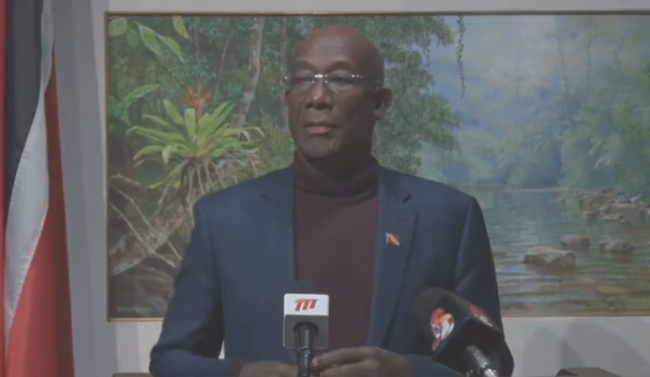 PM returns – says he has no plans to extend SoE

Prime Minister Dr Keith Rowley is back from his overseas trip to the United Kingdom.

Dr Rowley returned to the country last night and gave an update of his trip to the media and the public. He attended the COP26 summit in Glasgow and was in the United Kingdom for energy discussions.

Away from the topic of his trip, one of Rowley’s highlight statements involved his response to a question on the current State of Emergency.

He said: “The State of Emergency comes to an end at the end of this month and no I don’t have any intention of asking the Parliament to extend it.”

The curfew, he said, arises out of the State of Emergency and once the SoE ends the curfew goes with it.

“I think by now we would have gotten into a routine and I think by now the population should be able to cope and to do what needs to be done because this is no longer a short-term situation.”

“This situation that we are in, we are in it for the long haul.”

Back on the issue of energy, Rowley said that on November 17, Shell and the Government would sign off on the amended Product Sharing Contract to access the 27 per cent of the Manatee field that belongs to T&T.

Rowley added, “So right now, in dealing with the coal problem, the market for gas is the better option and fortunately for us, we are on the gas side of supply.”