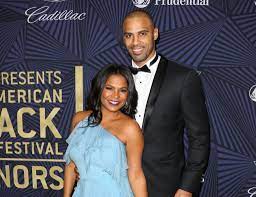 Actress Nia Long has posed a cryptic message after it was revealed that her long term boyfriend, Boston Celtics head coach, Ime Udoka, is facing suspension for having a consensual relationship with a co-worker.

Nia, is known for her role as Will’s girlfriend Lisa on Fresh Prince of Bel Air along with her role in movies such as The Best Man, Boyz n The Hood and Big Momma’s House.

The pair had been in a relationship for some time but yet to get married officially.

The Celtics coach has been accused of having an improper affair with a female member of the team staff.

Such an allegation is deemed a violation of the franchise’s code of conduct even though the affair was said to be consensual.

Hours after the news broke, she took to her Instagram handle as she shared a long cryptic post on her story.

She posted “…stay in your course because it’s going to happen when it’s supposed to happen. It doesn’t happen for everyone at the same time, so you can’t compare your life to someone else’s.”

The couple have a 10 year old son together and they have not yet released any statement regarding the future of their relationship.