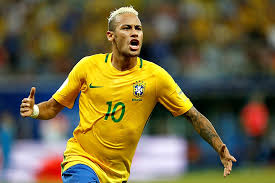 Neymar became the youngest player to make 100 appearances for Brazil on Thursday but the Paris Saint-Germain forward had to settle for a 1-1 draw as he failed to score in a friendly with Senegal in Singapore.

Roberto Firmino opened the scoring for the Copa America champions with a stunning lob after a Philippe Coutinho lay-off in the eighth minute.

As the half progressed, the livelier Senegal became, driven on by their captain Cheikhou Kouyate.

Famara Diedhiou levelled from the penalty spot just before halftime after Sadio Mane was dragged down in the area.

“The team offered less than what it can produce, we didn’t play and compete to the level we can. It was not a good game from us. We were below our normal competitive level,” Brazil coach Tite told reporters.

Neymar, who was not in the side that won the Copa America in June, had a relatively quiet game but went close with a 67th minute freekick.

He then teed up Richarlison whose shot from the edge of the box flashed wide.

Ismaila Sarr and Mane both had chances to snatch the game for the Lions of Teranga.

Although he failed to get on the scoresheet, it was still a big day for the 27-year-old, who became one of seven Brazilians to reach 100 caps.

He has scored 61 goals for the Selecao, making him the third highest scorer in the history of his national team.

Neymar is one behind Ronaldo but needs 16 to catch Pele who only played 92 matches. He has also provided 41 assists.

He won an Olympic gold medal in Rio de Janeiro in 2016 but has experienced many disappointments for his national team, particularly at the World Cup.

In 2014, in Brazil, a back injury in the quarterfinals against Colombia prevented him from being on the field for the 7-1 semi-final thrashing from Germany.

He scored twice during the tournament in Russia four years later, but Brazil were dumped out at the quarterfinal stage by Belgium.

Senegal coach Aliou Cisse said that overall he was pleased with Thursday’s outing.

“The players failed to follow their instructions in the first 10 minutes but after that they did everything I asked of them,” he said.

“Unfortunately, we didn’t go on to win and I must congratulate my players on doing a great job despite it being just a friendly.

He added: “We are happy to play matches like this against teams like Brazil. Not only will it help us prepare for matches against the very best but it will also help us develop ahead of what we hope will be future matches against very good European and African teams.”