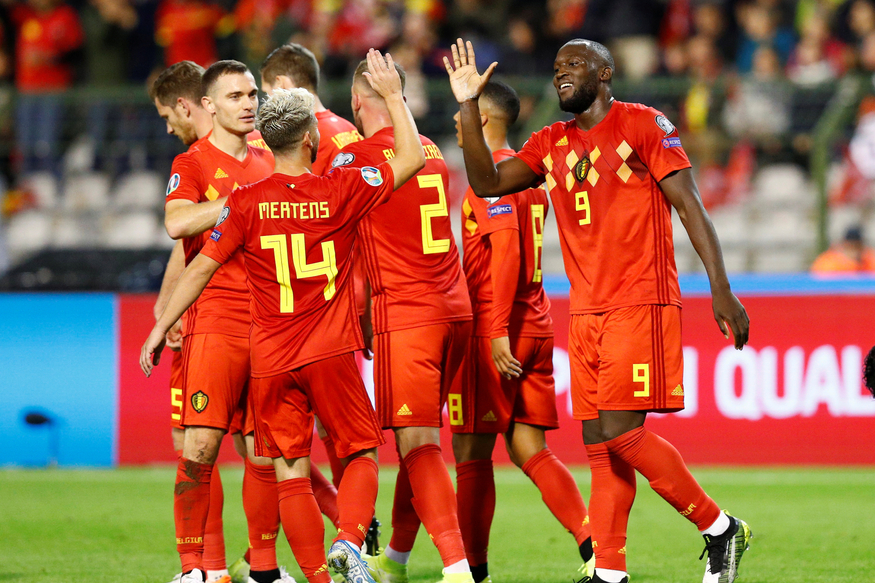 Belgium became the first side through to the Euro 2020 finals after thrashing San Marino 9-0 on Thursday with Romelu Lukaku scoring his 50th and 51st international goals.

Russia was on the verge of joining the world’s top-ranked nation as second qualifiers from Group I after running out 4-0 winners at home to Scotland with all the goals coming in the second half.

Unbeaten Belgium has 21 points from seven games, with only one goal conceded, while Russia has 18 and Cyprus, 2-1 winners over Kazakhstan in Astana, are on 10. The top two qualify directly.

San Marino managed to keep a clean sheet for 27 minutes against the 2018 World Cup semifinalists before, as expected, the floodgates opened at Brussels’s King Baudouin Stadium and the goals poured in for Roberto Martinez’s side.

Inter Milan striker Lukaku became the first Belgian to reach a half century of international goals with a right-footed shot to open the scoring.

He set up Nacer Chadli three minutes later before an own-goal from Cristian Brolli put Belgium 3-0 up in the 35th. Lukaku grabbed his second on 41 minutes assisted by Real Madrid’s Eden Hazard.

“It’s nice to be so good in the national team, but at the end of the day I want to win a trophy with Belgium,” Lukaku told Belgian broadcaster RTBF.

A deflected Toby Alderweireld effort in the 43rd minute and a Youri Tielemens shot in stoppage time saw Belgium cruise in 6-0 up at the break.

The pace slowed before Christian Benteke broke his three-year international drought by coming off the bench to score three minutes later, in the 79th, by wrong-footing the goalkeeper from the edge of the area.

Yari Verschaeren, 18, came off the bench to score his first senior goal from the penalty spot to make it 8-0 in the 84th and Timothy Castagne rounded off the tally in the 90th minute.

“We wanted the 10th but we didn’t get it, unfortunately,” said Hazard.

“We started well, we had some chances and could have scored sooner. But we know that in this kind of game you have to be patient.”

Russia dominated possession at the Luzhniki stadium but was frustrated throughout the first half by a Scotland side that failed to muster a single shot on target.

The Scots, who can no longer qualify automatically but remain in contention through the playoffs, crumbled after the break.

Artem Dzyuba made the breakthrough for Russia on the volley in the 57th and a second followed three minutes later when Magomed Ozdoev blasted a long-range screamer past David Marshall.

Dzyuba headed in his second in the 70th minute, with an Aleksandr Golovin shot going in off the post in the 84th, as Russia cruised to a comfortable win.

PAHO 4.6 million people have Syphilis in the Americas 0

Clearance given for Venezuelan plane to repatriate nationals today 0