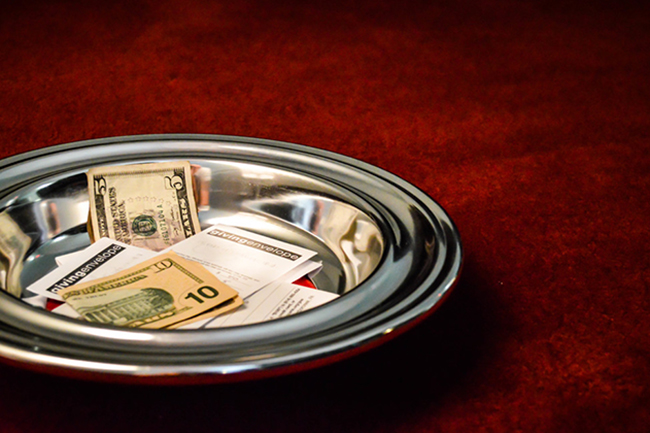 A Guyanaese woman, who threw her husband’s monthly pay-cheque and her wedding band into the offering plate at a well known Deliverance Ministry church in Berbice, Guyana, is seeking the police intervention after the pastor said he cannot return the offering.

The woman’s husband became furious after he found out what his wife did but reports are that the church’s pastor, who is a foreign national, told the woman this week,” to have faith and believe God for whatever breakthrough or miracle that is needed”.

The woman, fearing that the Almighty would not grant the miracle, rushed to Berbice Police Divisional Headquarters for assistance since she was given an ultimatum by her husband, who works at a Hinterland location, to recover his money and her wedding band. If not, he told the woman to ”go and live by the pastor.”

Reports are that the man recently returned from the Hinterland and discovered that the family’s bills were unpaid and there were no groceries in the house. The woman then informed him that she placed his monthly salary and her wedding band in the popular church’s offering plate.

The married mother of three became a follower of the religious body, which has several branches along the coastlines of the Ancient County, several months ago. The church also broadcasts its services frequently on social media.

Reports are that members of the congregation would make large contributions to the church, including hefty sums as well as jewellery.

The woman is awaiting advice from the police on the way forward.

Missy Elliott drops a new album; admitting her 2005 EP was her best 0

Cuba Generated US$1.9 billion in Foreign Investments for 2020 0