As fans await the actual release of Donda, Kanye West held his third listening event for the upcoming album, this time at Chicago’s Soldier Field.

On Thursday night, West clearly wanted to send some kind of message as he brought out accused rapist Marilyn Manson and rapper DaBaby, who has been embroiled in scandal for making homophobic remarks. The evening closed with Kim Kardashian walking out in a wedding dress. Oh, and West appeared to light himself on fire.

Most of the action took place on or around a recreation of West’s childhood home. During the final song “No Child Left Behind,” Kardashian strolled out in a white Balenciaga Couture gown. Yahoo Entertainment, quoting a source, stated that West and Kardashian, who filed for divorce in February, are not back together, but that she will always support him as the father of her four children. 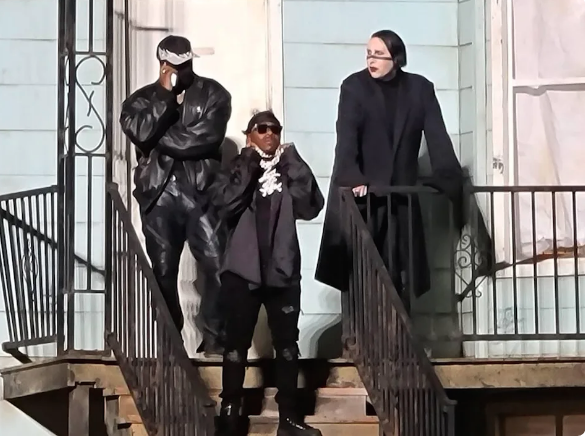 DaBaby is featured on West’s album and the 44-year-old rapper is obviously standing by him amid a wave of industry backlash. West is also standing by the disgraced rocker as the two are collaborating.

“Marilyn Manson’s voice is featured on Donda,” a spokesperson for Manson tells People. “And he will continue to conceptually collaborate with Ye on the Donda project.”

Manson has been accused of sexual assault by more than a dozen of women, including Evan Rachel Wood and Game of Thrones actress Esmé Bianco. Wood shared screenshots on her Instagram story of articles calling out West for working with the alleged abuser.

The rollout of Donda, West’s 10th studio album, has been slow, to say the least. But apparently, he’s raking in millions with these listening events.