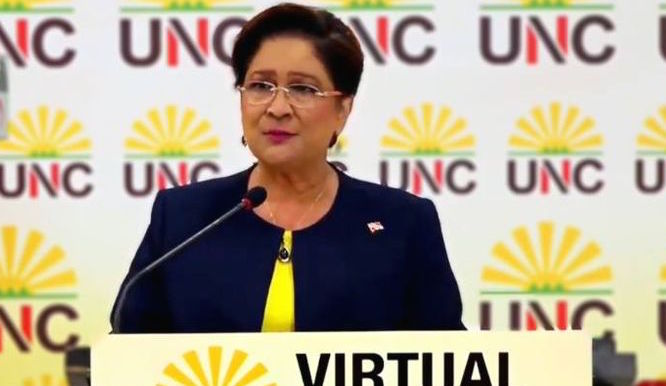 Kamla says budget is a rehash of “failed Manning policies”

Speaking at the UNC’s “Budget Facts” virtual meeting on Monday evening, Persad-Bissessar described the budget as a rewind of the economy and not a reset.
According to Persad-Bissessar government is taking us back to the 1980s. “It is the same failed Manning policies.”

She claimed that the effects of the Covid19 pandemic on the economy were not the sole reason for its current state, saying that the economy had already been on the verge of collapse.

Persad-Bissessar also slammed the plan to remove tax concessions on imported private vehicles.
“It was under the Panday government, a UNC government, that we opened up the used-car industry so ordinary people would not have to depend on expensive, high-end imported vehicles.”
“This budget has effectively destroyed the foreign-used car market,” she said.

Government cited the issue of traffic congestion as one of the reasons for removing the concessions, but Persad-Bissessar said the solution should have been better traffic management.
She also suggested the availability of more government services online, and the implementation of an efficient public transport system.

“Jack the raperman”: More Victims of Joel Balcon speak out… 0