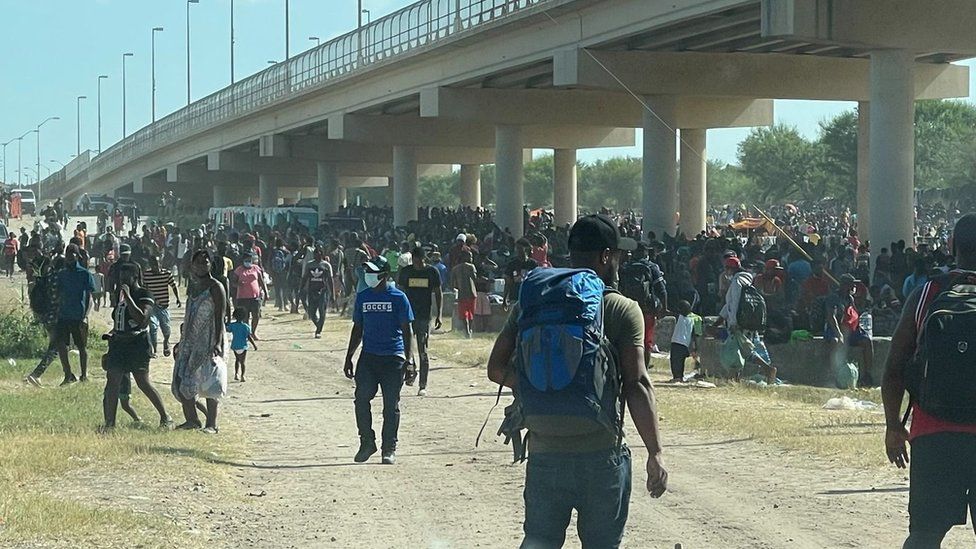 The US government is set to fly back to Haiti thousands of migrants who have gathered under a US-Mexico border bridge in recent days, US media report.

Flights will begin on Sunday and could involve up to eight a day, officials told the Associated Press.

At least 10,000 people, mostly Haitian migrants, are camped under the bridge connecting Del Rio in Texas to Mexico’s Ciudad Acuña, and more are expected.

Describing the situation as “unprecedented” and “surreal”, he said border patrol had been overwhelmed and “agitated” migrants were living in impossible conditions.

The border crossing at Del Rio was temporarily closed on Friday “to respond to urgent safety and security needs presented by” the influx of migrants, US Customs and Border Protection said.

The makeshift camp at Del Rio has few basic services and migrants, waiting in temperatures of 37C (99F), have been wading back across the river into Mexico to get supplies.

Shelters have been made from giant reeds and many are using the river to bathe and wash clothes in, the AP reports. At least two babies are reported to have been born in the camp.

Ramses Colon, a 41-year-old Afro-Cuban asylum seeker who worked in Peru to save money for the trip, said the camp was “chaos”.

“You stand there among thousands with your little ticket waiting for your turn,” he told the Washington Post. Migrants have been given tickets with numbers while they wait to be processed.

Republican Congressman Tony Gonzalez, whose district includes Del Rio, said in an interview with Fox News that the situation is “as bad as I’ve ever seen it”.

“When you see the amount of people and how chaotic it is and how there is literally no border, folks are coming to and from Mexico with ease, it’s gut wrenching and it’s dangerous,” Mr Gonzalez added.

The migrants are mostly Haitians, with some Cubans, Peruvians, Venezuelans and Nicaraguans also present, reports say.

They appear to be part of a larger wave of Haitians heading north, many of whom arrived in Brazil and other South American nations after the 2010 earthquake, the Washington Post reports.

The US government has been facing a surge of migrants at the border.

Naparima MP questions why TT is still on EU blacklist 0