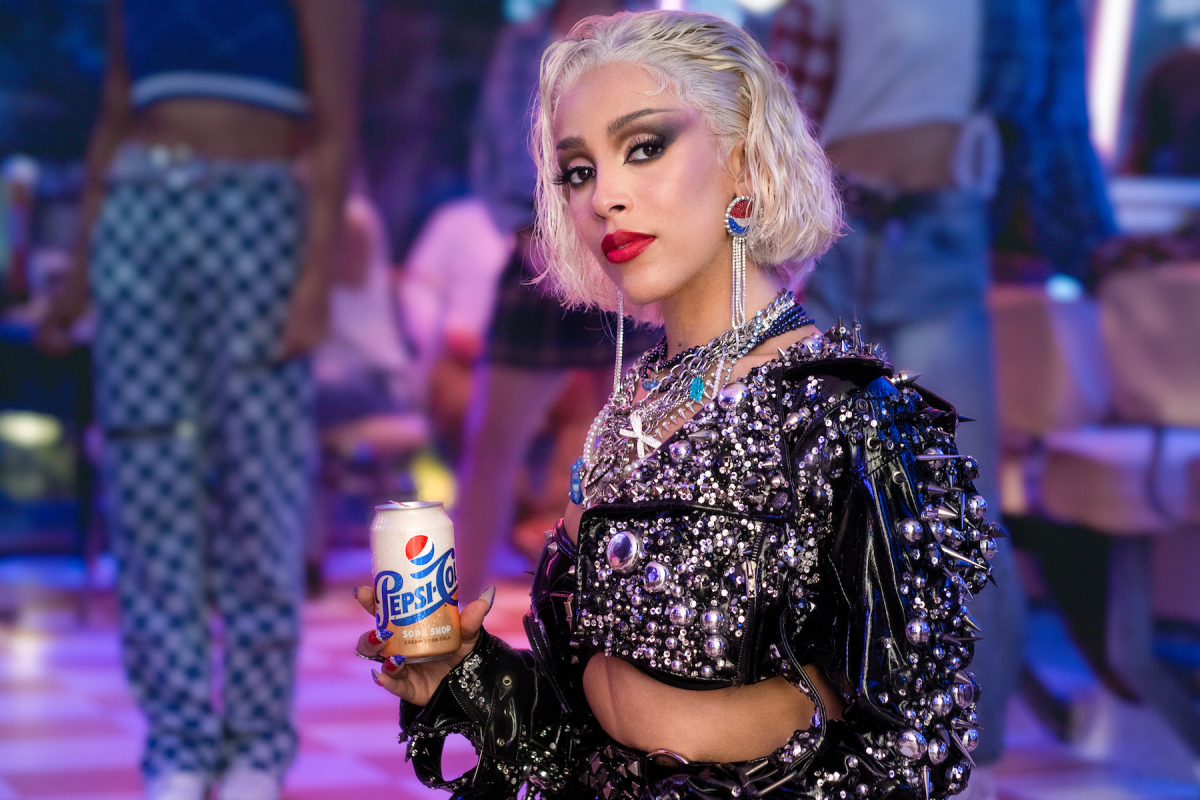 Doja Cat is on top of the world at the moment. Her latest album Planet Her debuted at No. 2 on the Billboard 200 chart and remains in the top five weeks after its release. With all that success comes a multitude of opportunities, such as the one Doja Cat received through her latest collaboration with Pepsi.

Soda shops were popular in the 1950s, and Pepsi looks to bring that era to life once again with Doja Cat. To introduce their new campaign, Pepsi tapped Doja Cat to flip the classic anthem from the 1978 hit film Grease, “You’re the One That I Want.” It also happens to be the 50th anniversary of the iconic film.

Pepsi and Doja Cat’s rendition of “You’re the One That I Want” keeps the spirit of the original alive while including a new instrumental and vocals unique to Doja Cat’s eclectic style. The song comes with a music video-style commercial, directed by Hannah Lux Davis and choreographed by Sean Bankhead, that finds Doja Cat hanging out on the Rydell High campus.

But instead of going after a man like the original, Doja Cat has her eyes set on the new Pepsi-Cola Soda Shop cans.

“Working with Pepsi on this remake of ‘You’re the One that I Want’ has been surreal,” Doja Cat said in a statement. “It’s such an iconic song and brand, so to have the creative license to put my own spin on it for the launch of Pepsi-Cola Soda Shop was a once-in-a-lifetime opportunity; I had to be a part of it.”

She also revealed to Billboard the song was not easy to make, especially with how artists recorded songs back in the 1970s.

“I sing, but I feel like I have a lot of trouble singing certain things, even my own songs,” she said. “This was one of those songs where I had to really push and find different parts of my singing ability to make it happen. Back then, music was so different and so carefully done. It wasn’t just loops and beats, which is why I feel like this was a bit harder for me. I can’t believe I was able to kind of hit some of those notes because it’s a very difficult song to sing. I’m happy about it.”

Todd Kaplan, vice president of marketing at Pepsi, added, “Pepsi has a great heritage in music and we couldn’t be more thrilled to continue this legacy by partnering with Doja Cat around the launch of Pepsi-Cola Soda Shop.”

Fans will be able to get their hands on the new Pepsi product on September 20 nationwide. The limited-edition Pepsi-Cola Soda Shop in Cream Soda and Black Cherry flavors will be available in 20 oz bottles and 12 oz cans.

On top of working with Pepsi, Doja Cat will grab hosting duties at the 2021 MTV Video Music Awards on September 12. Doja performed a medley at the 2020 MTV VMAs and took home the award for Best New Artist. This year, she’s hosting, performing and has five nominations, including Artist of the Year and Video of the Year.

Opposition still waiting for a response from the NCRHA 0