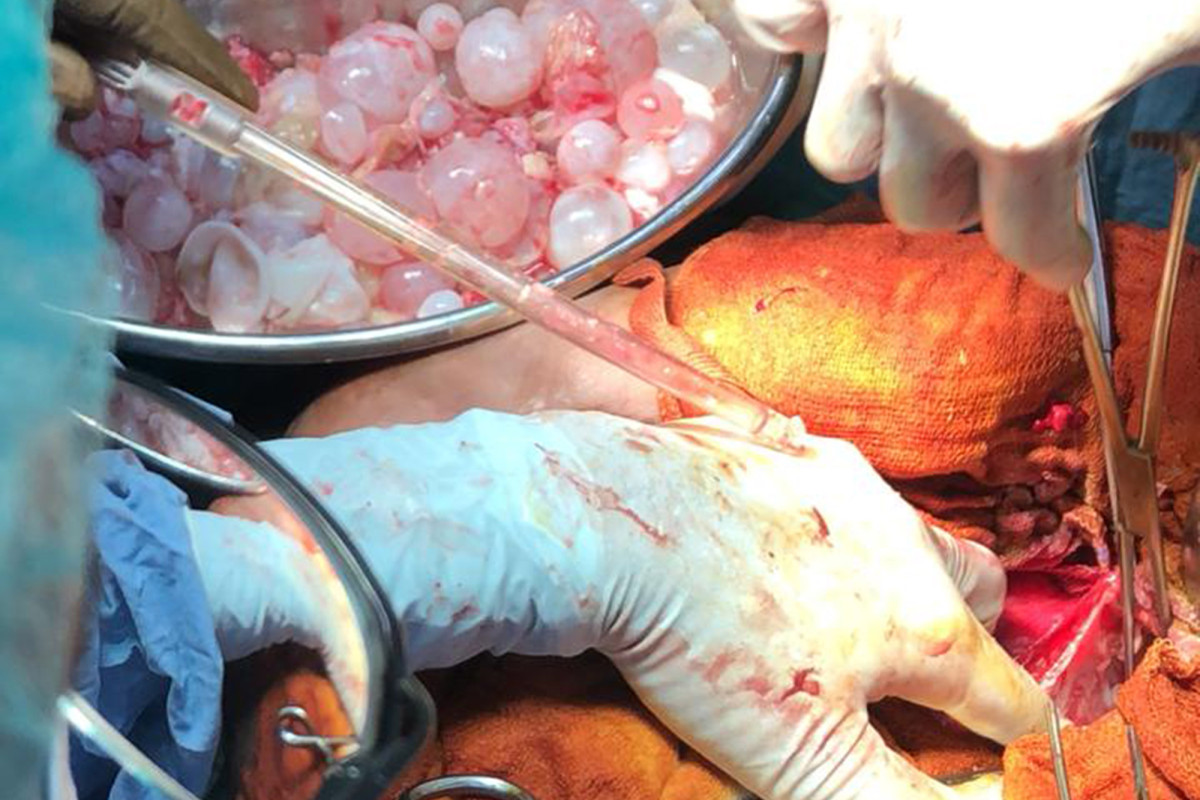 The 29-year-old woman from India had complained about continuous severe abdominal pain for the last three months and would vomit whenever she tried to eat.

She was immediately admitted to Saveetha Medical College and Hospitals, Thandalam, where doctors carried out tests that revealed multiple cystic lesions.

They then did a CT scan which showed four large cysts were taking up about half of her abdominal cavity and inside there were numerous smaller cysts, known as daughter cysts.

It led them to diagnose her with multiple peritoneal hydatid disease – a parasitic infection caused by canine tapeworms.

Hydatid disease is rare and is carried by dogs and foxes, with the tapeworm tending to live in an animal for about one year.

Infected dogs and foxes excrete tapeworm eggs in their feces and if ingested this can cause infection in sheep or humans.

Once ingested, the eggs hatch into larvae, which can form cysts. They are most commonly found in the liver but may form in other organs in the body including the lungs, heart, brain and bone.

Dr. Saveetha Rajesh, Director, Saveetha Medical College and Hospital, said: “The total count of the daughter cysts in all the four cysts put together was at a staggering 759.

“This is probably one of the rarest of the occurrences in the medical history and also hydatid disease is endemic in Tamil Nadu and Andhra Pradesh.”

It was a challenging operation for the doctors as the cysts were connected to her liver, portal vein, bile duct, left kidney, large intestine, urinary bladder, large vessels of the right lower limb.

Dr. Sundaravadanan, a general surgeon at the hospital, said: “Rupture of the cysts would have lead to the immediate shock and morbidity of patient increasing the challenge for the surgeons and anesthetists.

“After the surgery, the patient was meticulously monitored and was stable during the post-operative period.