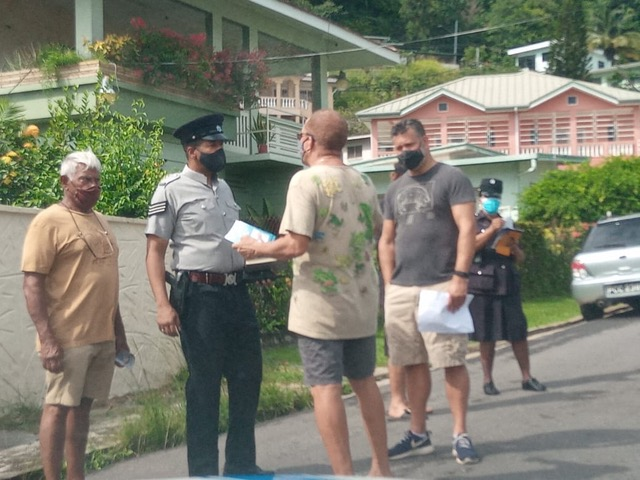 Carenage police and residents join forces; say crime will not be tolerated

Police and residents of Carenage are warning would-be criminals that crime will not be tolerated in the area.

The warning comes as the police and residents strengthen their partnership in the fight against crime following a recent test of the Sea View Neighbourhood Watch Group’s (SVNWG) ‘Horn Test’.

On November 28th, the SVNWG, led by Richard Bradford, in collaboration with officers the Carenage Police Station, launched its ‘horn test,’ which saw over 85% of the community participating.

The event was a resounding success in the police and residents’ efforts to build a better, closely-knit neighbourhood, and develop the art of community policing.
The SVNWG, which was launched in October 2020, also installed 18 reflective Neighbourhood Watch signs across the community.

The initiative was birthed out of the increase in criminal activities within the community.

The “horn test” is a technique being utilised by the residents which will result in rapid response by police to distress calls, while alerting the entire community about the imminent and/or prevailing threat.

Inspector (Ag.) Mohammed, of the Carenage Police Station, who led officers on a three-hour community walk after the “horn test”, assured the residents that police will continue to work hand-in-hand with residents to restore the feeling of safety, security and comfort that every law-abiding citizen had the right to enjoy.

Mr. Bradford said he was very satisfied thus far with the level of professionalism and dedication to duty by Insp (Ag.) Mohammed and the officers of the Carenage Police Station and encouraged other communities to implement similar initiatives to bolster the Police’s fight to crime and securing safer communities for all.

Soka in Moka to be rebroadcast following internet connectivity issues 0