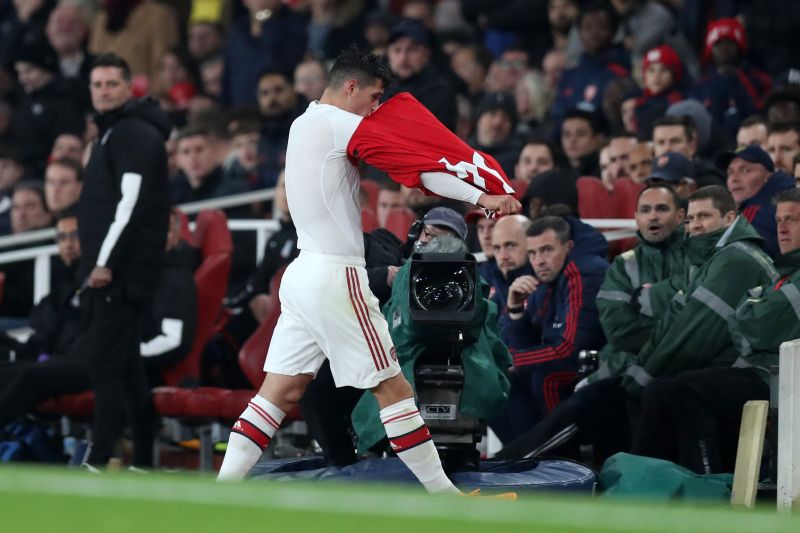 Hector Bellerin has called for everyone at Arsenal to come together following club captain Granit Xhaka’s tantrum on being substituted on Sunday during the 2-2 draw with Crystal Palace.

Bellerin, who is the Gunners’ third captain after Xhaka and Pierre-Emerick Aubameyang, is sidelined through injury but he took to Twitter to urge understanding and the team to unite.

Manager Unai Emery has said he will talk to Xhaka before he decides whether to strip the Swiss international midfielder of the captaincy.

The 27-year-old – who was made captain in the close season following a secret ballot of the players exploded with fury when he was replaced in the second half of the Palace game.

He trudged slowly to the touchline while petulantly gesticulating to the fans who had cheered his substitution and were angrily urging him to get off the pitch quicker.

Xhaka’s meltdown climaxed when he ripped off his shirt, appeared to shout expletives at supporters and stormed past Emery straight down the tunnel to more derision from the stands.

“We are all humans, we all have emotions, and sometimes it’s not easy dealing with them,” tweeted Bellerin.

“It’s time to lift each other up, not to push each other away. We only win when we are together.”

Others have been less forgiving such as Arsenal legend Ian Wright especially with the club struggling for form with only two wins in their last eight Premier League matches.

“He’s got the responsibility of being able to take that on board because he’s been voted in. You can’t go like that.

“The amount of stick someone like Mesut Ozil has got I could understand if (he) throws his shirt down.

“He’s the captain. The manager has got faith in him. He should be apologizing. He should have apologized already.

“That’s the guy they’ve chosen as captain and that’s not captain’s behaviour.

“Arsenal fans have shown a lot of patience with him and the performances he has put in. He owes them a lot more than that.”

Meghan and Kate In Talks About ‘Collaborating’ On A Netflix Project? 0