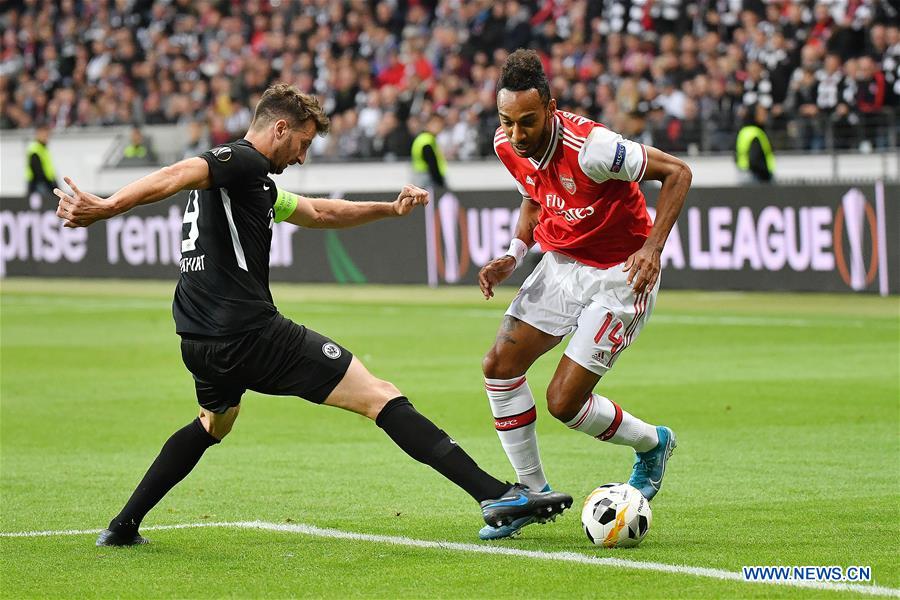 Arsenal staged a clinical chance conversion and came off with a winning start as goals from Joe Willock, Bukayo Saka and Pierre-Emerick Aubameyang were enough to edge ten-men Frankfurt 3-0 in UEFA Europa League on Thursday.

Hosts Frankfurt started highly motivated into the game and assumed control but still it were the visitors from London who created the first clear-cut opportunity of the game when Lucas Torreira volleyed a cross from Saka over the target in the 5th minute.

The “Eagles” turned up and pressed Arsenal into the defense but neither Filip Kostic, who rattled the outside of goal from sharp angle, nor Daichi Kamada was able to break the deadlock with an effort from promising position.

Both sides continued to trade attacks but the visitors were eventually able to open the scoring as Saka set up for Willock, who marked the opener with a deflected shot from the edge of the box in the 38th minute.

Frankfurt had the chance to restore parity before the break but Arsenal goalkeeper Emiliano Martinez defused Andre Silva’s attempt from close range.

After the restart, both teams continued to produce goal-scoring opportunities at both ends of the pitch. However, Arsenal focussed on fast breaks whereas Frankfurt pressed for the equalizer.

Frankfurt lacked in accuracy in front of the target and had to continue with ten-men from the 79th minute as Dominik Kohr received his marching order for repeated foul play.

The send-off took the wind out of Frankfurt’s sails meanwhile Arsenal killed the game six minutes later after Saka had all the time and space at the edge of the box to beat Trapp with a curl into the far post corner.

Things went from bad to worse moments later as Aubameyang wrapped up the 3-0 away win after beating Trapp in a one-on-one in the closing period.

“It is a bitter defeat for us because the result does not reflect our performance. We tried to equalize the scores but then Arsenal doubled their lead,” Eintracht Frankfurt head coach Adi Hutter said.

The victory put Arsenal atop the standings in Group F, followed by Standard Liege, Frankfurt and Vitoria SC.