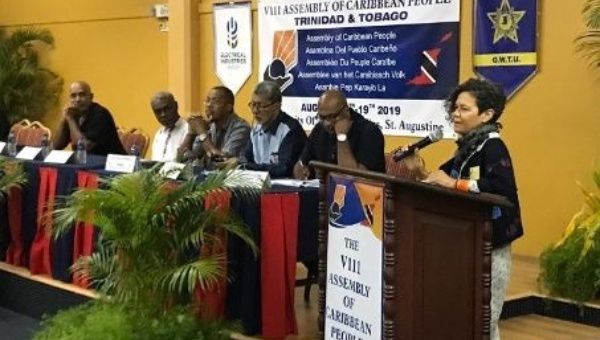 Over 60 delegates from 13 countries participated Thursday in the VIII Assembly of Peoples of the Caribbean, which will take place until Aug. 19 in Trinidad and Tobago, with an agenda to debate strategies countering imperialism. Those present agreed that regional integration and collaboration is key to the countermovement solution.

Cuban union leaders from the Central de Trabajadores invited the rest of the delegates to join the anti-imperialist meeting of Solidarity, for Democracy and Against Neoliberalism to take place in November in Havana.

During the meeting so far that began Aug. 15 The Union of Petroleum Workers of Trinidad and Tobago stated that the labor structure under neoliberalism reduces the worker’s ability to organize because they don’t have job stability, coupled with illicit hiring systems that also can be used to intimidate and mistreat workers hired using methods outside the law.

Haitian constituents at the meeting said that their nation’s major protests meant to oust their allegedly corrupt president, Jovenel Moïse, “unites us,” and continues the country’s path to independence and against colonialism. Members from Haiti said, “each of the islands must move forward in a great movement for liberation. We must consolidate a Caribbean community and break all barriers.”

The Assembly condemned the U.S. sanctions against Venezuela as “a move calculated in order to cause damage.”

ALBA members said Friday that the conference “strengthens the struggle for Our America and for Internationalism. It is about building alternatives to the capital … and for socialism.”​​​​​​​