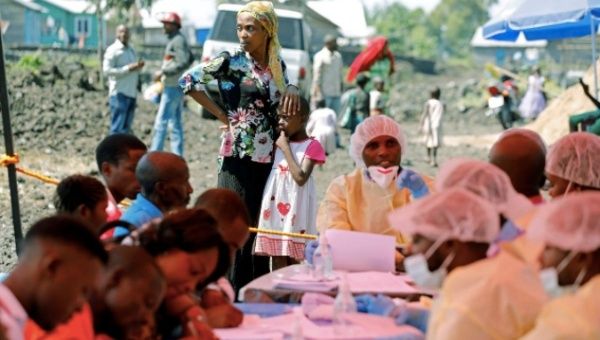 A new drug completely “cured” a pair of Ebola patients in the Democratic Republic of the Congo, supporting doctors’ claim that seeking immediate treatment can save lives.

“These cases were detected very quickly. The husband was infected, he was at home for 10 days and his wife and son were infected,” said Congolese National Institute for Biomedical Research director and the virus’s co-discoverer Dr. Jean-Jacques Muyembe during a press conference this week.

“As soon as the response teams detected these cases, they brought them here to the treatment center. We gave them the treatment that is effective and here in a short time both are cured,” said Muyembe. “Ebola kills quickly and Ebola heals quickly. That’s the message.”

The epidemic has raged across the country, causing some 2,850 infections and 1,913 deaths, the latest report from DRC national authorities confirmed Friday. It’s been declared the deadliest Ebola outbreak in the country that began a year ago, and the second deadliest worldwide.

Surrounding nations, Rwanda, Burundi and Tanzania, are worried about the risk of expansion. Currently, there’s a rate of 81 cases per week in the DRC with the majority of deaths happening within communities and not within medical treatment centers.

However, Muyembe assured reporters that with the new treatments, physicians “can get to completely control the epidemic in three or four months.” The just introduced ‘cure’ comes when infections are starting to spread further across the DRC.

The pair of drugs, produced by Regeneron Pharmaceuticals, based in the United States, and the U.S. National Institutes of Health, showed a 90 percent efficacy in patients suffering from the disease’s first phase evolution.

The two drugs are now being “used to treat Ebola patients because, according to the studies and the results we obtained in the lab, these are the two drugs that are effective.”

After much debate within the organization on whether or not to sound the alarm, in July, the World Health Organization declared a health “emergency” in the DRC after Ebola had infected people in the city of Goma with a population of two million that borders Uganda.