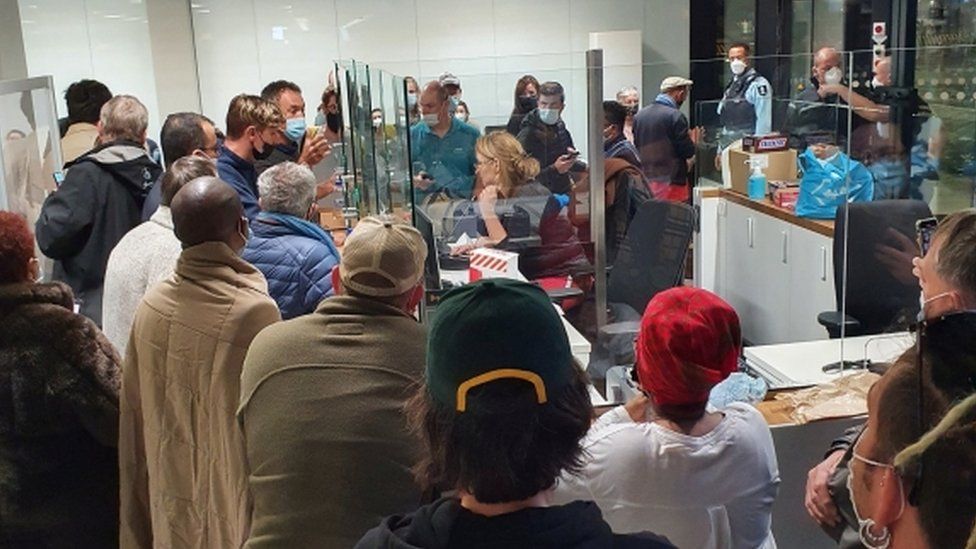 Sixty-one people who arrived in Amsterdam on two flights from South Africa have tested positive for Covid-19, Dutch officials say.

They have been placed in isolation at a hotel near Schiphol airport.

They were among some 600 passengers held for several hours after arrival while they were tested for the virus.

The Dutch authorities are carrying out further testing to see if there are any cases of Omicron, named on Friday as a variant of concern by the WHO.

The variant was first reported to the World Health Organization in South Africa on 24 November.

In the last few hours many countries around the world have restricted travel from the southern African region.

Meanwhile the Netherlands is one of several European countries struggling to contain record numbers of infections.

A partial lockdown will be extended on Sunday, with all hospitality and cultural venues forced to close between 17:00 and 05:00, at least until 19 December.

Passengers travelling from Cape Town to Manchester via Amsterdam told the BBC that they were held on the tarmac at Schiphol airport for four hours, before eventually disembarking.

New York Times correspondent Stephanie Nolen, who was on the flight, tweeted that the passengers were not even brought water while they remained on the plane.

When they were eventually allowed to leave, some passengers shared photos of themselves clustered together in a room with little ventilation.

On Saturday the Dutch health authority said 61 people on the flights had tested positive.

“The positive test results will be examined as soon as possible to determine whether this concerns the new worrisome variant, which has since been given the name Omicron variant,” it said in a statement.

Anyone who tested positive would have to quarantine at a hotel for seven days if showing symptoms and for five days if not, it added.

Those that tested negative have been asked to isolate at home for five days and take further tests, while those in transit are allowed to continue their journeys.

However, there are reports that some passengers have not received written proof of a negative test and are therefore unable to board onward flights.

SpaceX Wins Nasa Contract to Send Humans to the Moon 0

Senator defends her decision to vote with government 0