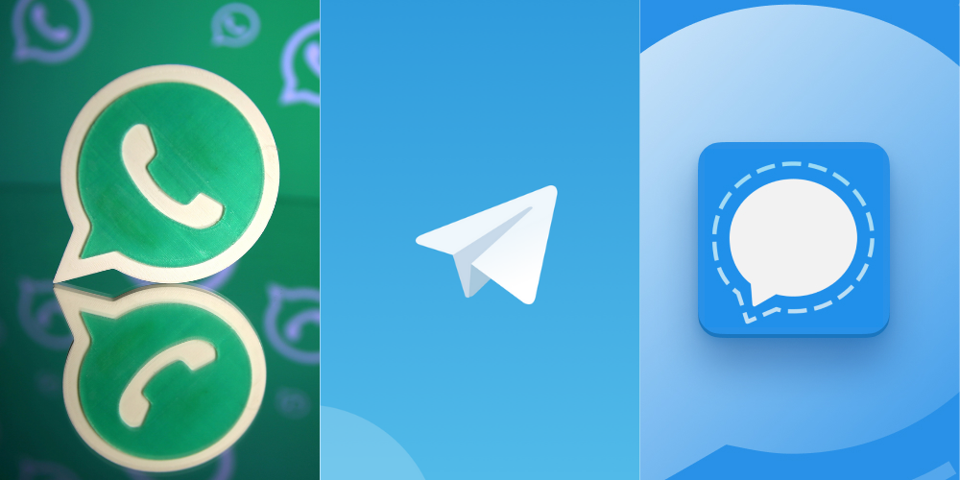 In recent week’s, Telegram and Signal have registered record numbers of new users, while WhatsApp continues to be news and controversial after it announced changes in terms of use and privacy.

The messaging application announced last week that it will share different data of its users with its parent company Facebook, and that it will be able to do the same with its Instagram and Messenger platforms.

In the midst of the questions, WhatsApp maintains that its new conditions, which must be accepted by those who use it until February 8th, were misinterpreted.

“We want to clarify that the policy update does not affect in any way the privacy of the messages that users share with their friends and family,” the platform said in a statement issued on Monday.

Despite those arguments, the long debate regarding which instant messaging service is more secure has been rekindled since the change in WhatsApp.

And while they may seem similar at first glance, the three apps (‘Oh Lawd’) have some important differences that the IzzSo team discusses here.

What about ‘d’ data collected?

The first thing to know is that, among the three messaging platforms that have been talked about the most in recent days, there are different levels of data that are collected.

And it is a central issue because that is the information that WhatsApp can share with Facebook and the other applications that that company has.

“WhatsApp has a lot of metadata, which is the information that is obtained from any message we send, such as the brand of the phone, the time of the message, your location and others. With this you can know a lot about your users “, explains Cristian León, head of the innovation program of the civil organization Affairs of the South, based in Argentina.

The digital rights expert tells BBC Mundo what This messaging application, which is the most popular in the world, has a closed programming code and therefore has little transparency about what it collects.

On the WhatsApp website, the data obtained and the information that a person provides by accepting its terms of use are detailed. In addition to the name, phone number and contacts, there are details of the use of the platform (time or performance, for example), transactions from the application, brand and model of the device or type of connection, among others.

For its part, Signal is limited to asking for the phone number and adding the name is optional. Both have open programming codes, so it is possible to scrutinize what data is obtained and what is done with it.

The big ‘bachannal’: the messages

Since the expansion of mobile messaging applications began around the world, the big question was and is about the security of the messages that are exchanged.

The platforms were evolving in this regard and since a few years ago Signal and WhatsApp established end-to-end encryption as the default function for all the conversations of their users.

It is a kind of padlock that only the sender and receiver of the message can open.

In theory, not even the applications in which the exchange was made can access the contents of the talks.

“Neither WhatsApp nor Facebook can read your messages or listen to the calls you make with your friends, family or colleagues on WhatsApp. Everything you share will remain between you, “said the platform in its statement on Monday.

Telegram seems to have a disadvantage in this regard since end-to-end encryption only kicks in when using the “secret chat” mode, but regular conversations do not have that feature.

All three also offer an increasingly used modality known as “temporary messages” in which text, photos, locations or documents shared in a conversation self-destruct after a certain time.

The difference is that in WhatsApp the messages disappear in the next seven days, while in Signal and Telegram you can configure the time so that there is no trace of the interactions after a few seconds.

Another difference is that the application that is owned by Facebook does not have the option to block screenshots for conversations, while its competitors do.

Although it is logical that the majority limit themselves to using these applications to keep in touch with their acquaintances, different controversies have occurred in recent years.

For example, Telegram was found to be used as a means of disseminating Islamic State propaganda.

The extremist group recruited recruits from there and took advantage of encrypted group chats to maintain communications and broadcast videos of their actions.

And since last year Telegram is known to be one of the platforms that US right-wing groups use to spread their messages, although most of them use other applications that allow anonymous interactions to summon their activities or spread conspiracy theories.

WhatsApp also had problems and in 2019 decided to delete hundreds of thousands of accounts suspected of using its service to spread child pornography. The company maintains a zero tolerance policy for the sexual exploitation of minors.

The application, according to different analyzes, was identified as being, together with Facebook, one of the largest channels for the dissemination of false news in electoral times in countries such as Bolivia, Colombia or the United States.

Signal, which has fewer users than the previous two, has so far not been singled out for being used as a channel to recruit recruits or spread false information.

However, it did find itself in the midst of some political controversies such as when it was denounced that it was the application that the former president of the regional government of Catalonia, Carles Puigdemont, used to communicate with one of his allies during his attempt to declare the independence of that region.

(With information from BBC).

Two Held For Camouflage Hat and Resisting Arrest In Oropune. 0