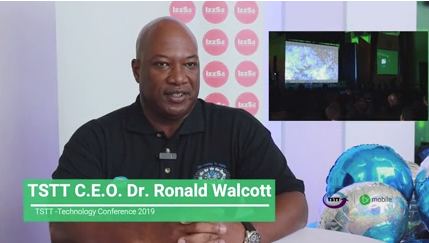 TSTT forging ahead with 5G technology and ‘Agility’

TSTT Trinidad and Tobago’s indigenous telecommunications company held two successful conferences last week. On Wednesday 04th December 2019, TSTT launched 5 G technology at the Hyatt Regency outlining its pioneering foray into this cutting edge technology which enables customers both private and commercial to explore and engage the world of ‘the Internet of Things’ (IOT) which is facilitating global change in what is being described as the forth industrial revolution.Dr. Walcott told IzzSo media of the genesis of TSTT’s first Technology conference, held on Friday 06th December 2019, which was envisioned to introduce the company’s employees to the suite of changes and new technologies which positions TSTT ahead of its competitors.

TSTT C.E.O. Dr. Ronald Walcott also spoke of how the Company’s leadership effectively championed significant changes in the company, positioning TSTT on a sustainable path to profitability and evolving company systems, processes and infrastructure for the future. He also spoke directly to the immense possibilities of 5G technology which TSTT’s has pioneered in the region.