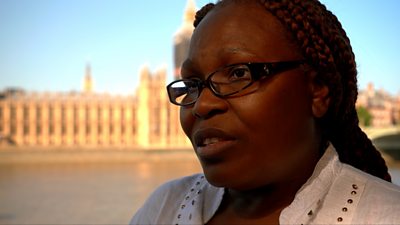 Charleen Jack-Henry speaking with the BBC

The Trinidadian born mother of a British woman who went to Syria to join ISIS is urging authorities to allow her daughter and grandchildren to return to the UK.

Charleen Jack Henry’s daughter, 34 year old Nicole Jack, left London with her husband and her then four young children to join IS in October 2015.

Jack’s husband died while fighting for IS and she then married a Trinidadian fighter, Adil de Montrichard – who went on to die in an airstrike, which also killed her 10-year-old son, Isaaq.

Jack is currently being held in the Roj detention camp in Syria alongside her three daughters – aged 12, 9 and 7 – and thousands of wives and children of IS fighters.

Britain has said that it is willing to repatriate orphans and unaccompanied children but Jack says she is not prepared to allow her children to return to Britain without her.

Mrs. Jack-Henry, a nurse in London, says her grandchildren should be allowed to return and her daughter should also be allowed back to in the UK “face the consequences”.

Jack’s children attend a makeshift school in the camp, run by Save the Children.

Her eldest daughter, who is 12-years-old, spoke to the BBC telling them she didn’t like that the camp was dirty and that she missed her family in the UK.

The girl, whose name was not revealed, said, “I like learning different things, like different languages. When you learn more things, your brain becomes better and all these kind of things. I want to be smart when I grow up.”