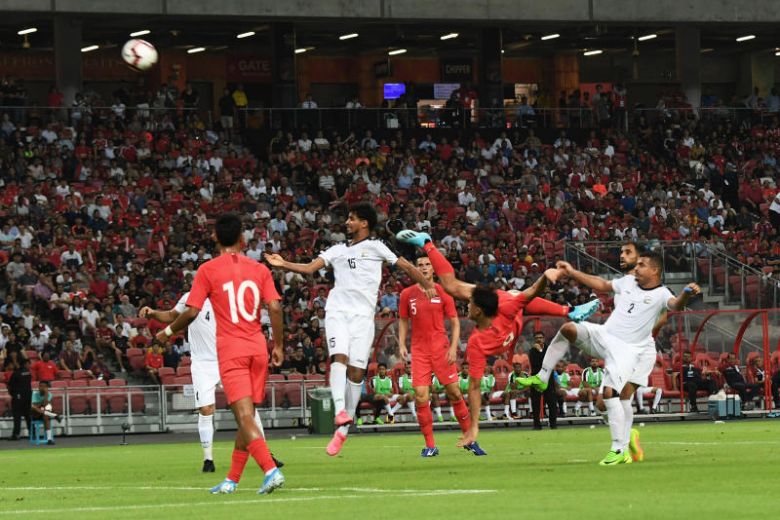 Displaying impressive high pressing, a willingness to take on men down the flanks and Ikhsan Fandi impressing up front, the Lions will be disappointed with just a point in their 2-2 draw against Yemen at the National Stadium on Thursday (Sept 5).

It was not the opening win they hoped for as Singapore kicked off Group D of the second-round World Cup Qualifiers, but to put things in perspective, the host are world No. 162 and the lowest ranked team in the group.

Yemen are 20 rungs higher in the Fifa standings.

The men in red peppered the visitors’ goal with numerous shots but found Yemen goalkeeper Salem Awad in good form.

Skipper Hariss Harun, who bossed the midfield, saw a seventh-minute snapshot saved by Salem before Shahdan Sulaiman also came close but his shot hit the side netting 10 minutes later.

Striker Ikhsan then thrilled the crowd with a bicycle kick that went over the bar in the 26th minute before the 20-year-old opened the scoring following a lovely passage of play on the left.

Faris Ramli released Shakir Hamzah with a delightful backheel, and the left-back’s cross found Ikhsan who guided his header past Salem for his sixth goal in 13 international appearances.

Despite their dominance, the Lions were twice caught napping as Yemen scored from their only two chances in the first half.

In the 34th minute, just seven minutes after Ikhsan’s opener, Ahmed Al-Sarori was afforded time and space on the right and he whipped in a cross that was missed by the Singapore defender. The ball reached Abdulwasea Al-Matari who thumped his shot past Izwan Mahbud.

Singapore’s Safuwan Baharudin nearly scored in the 42nd minute but his point-blank header was aimed straight at Salem.

The visitors took advantage and on the stroke of halftime, they took the lead after a ball over the top caught the Singapore backline flat-footed and Mohsen Hasan lobbed Izwan to make it 2-1.

But Tatsuma Yoshida’s men responded well after the interval and equalised in the 51st minute. Ikhsan did well to outmuscle and outsprint the Yemen defence to get his shot away and Salem could only palm the ball into Faris’ path and the forward slotted home.

The Lions went in search of the winner after that – Yoshida sent centre-back Baihakki Khaizan up front in the dying minutes – but had to settle for the draw.

Singapore next face Palestine at the Jalan Besar Stadium on Tuesday (Sept 10).

Loading...
Newer Post
Nicki Minaj announces retirement from music to start a family with ex-con boyfriend
Older Post
The 18th edition of the Pan American Games was deemed a success