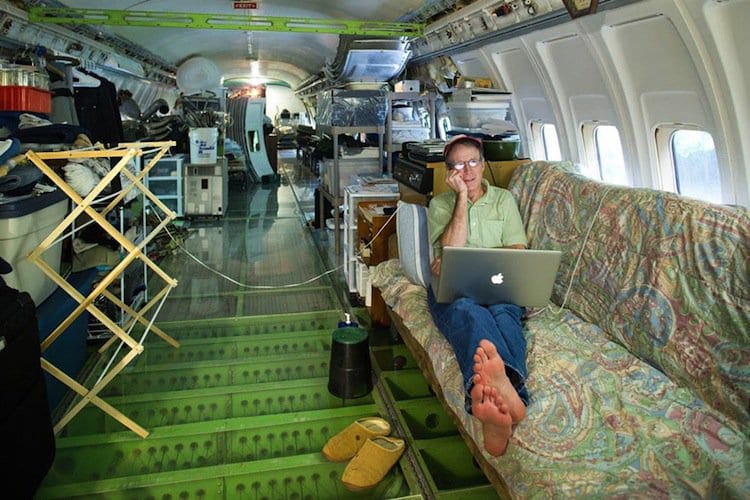 Rather than turning the plane into something like a modern house, Campbell is reusing much of the original equipment for his needs.

After a decade Campbell’s enthusiasm for the project has not waned. He sees potential in everything — like how the wings can serve as a great deck. This is anything but prefab building though – it’s a slow and deliberate process.

The cockpit is an excellent reading room, and he left much of the original instrumentation and controls intact. He even restored some elements, and he installed a computer monitor right in the middle of the instrument panel. He also got one of the original bathrooms back online, but only has a temporary shower for now.

At 1,066 interior square feet, the space is cozy but not cramped by any means – when it’s setup as a large studio it feels plenty big. The coolest trick may be the transparent floor.

The original was torn out and replaced with translucent panels, allowing visitors to see the super structure’s ribs and controlling cables running from the cockpit to the wings and tail. Campbell also has plenty of storage in the cargo hold.

While the wings make a great deck, he has a couple of big covered areas below them as well. He even uses the original water tank and plumbing to serve amenities like his clothes washer. The trick is to make the space habitable but maintain the feel of its original design’s purpose – to be 35,000 feet above the trees.