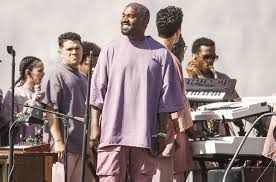 Kanye West is taking his Sunday Service to Cody, Wyoming, the town where he recently purchased the $14 million Monster Lake Ranch.

The next worship gathering will take place this weekend at the Powwow Garden outside the Buffalo Bill Center of the West. The event which has made stops in various cities like Atlanta, Chicago, and Dayton, Ohio is usually an exclusive affair; however, the Cody service has been advertised as both free and open to the public.

This will also mark the last Sunday Service before Ye delivers his Jesus Is King project.

According to the Buffalo Bill Center, the upcoming event will feature an 80-person choral group.

Kanye West at the Center of the West? Ye — and his 80-person choral group — host Sunday Service this weekend at the Powwow Garden. Free and open to the public. Yeah, you heard that correctly. #centerofthewest

During a recent appearance on The View, Kim Kardashian spoke about Kanye’s decision to start Sunday Service, saying it was intended to “heal” him.

“It was a really personal thing, and it was just friends and family,” she explained. “He has had an amazing evolution of being born again and being saved by Christ. For the most part, it’s just a musical ministry. Kanye doesn’t have his 501(c)(3) permit yet to make it an official church, but it is for God and it is a Christian church. It started off healing for him and now it’s become something that he really wants to share for everybody else.”