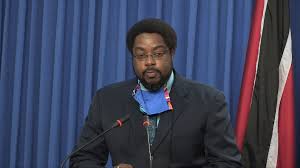 Increase in Covid cases in every county, says Dr Hinds

Every county in Trinidad has seen an increase in COVID-19 cases.

Speaking during Saturday’s media conference at the Diplomatic Centre in St Ann’s, Dr Hinds said: “Previously we saw where some have an increase and some have a decrease and that kept the numbers the same week to week. We have seen now an increase across the board from one week to the next.”

“There has been a steady week-on-week increase, at first smaller but getting larger from one week to the next as we move from week 40 to week 45. This is a cause for concern and it is also reflected in what we call the percentage positivity, meaning the COVID tests that were done that come back as positive.

“When we look at data from the monthly time scale we see October being higher than the previous three months and November rapidly catching up. The monthly positives for November hovers around 35 per cent as opposed to the 25 per cent to 35 per cent we have been seeing from July to the months of September and October,” Hinds said.