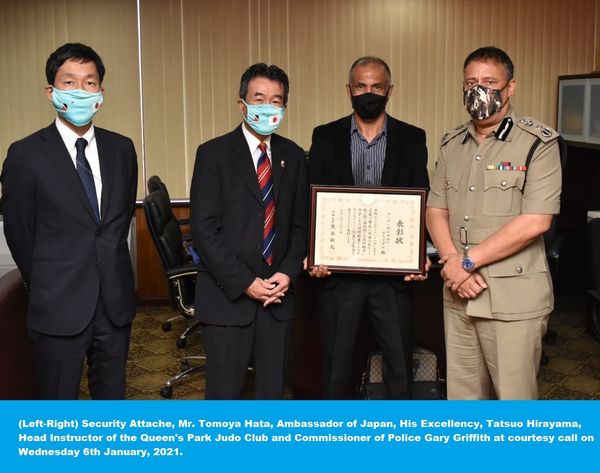 The martial art of Judo will soon be introduced in a pilot program at the Police Academy, as part of the physical training regimen of new recruits of the Trinidad and Tobago Police Service (TTPS).

This was the decision taken by Commissioner of Police, Gary Griffith, during a courtesy call with the Ambassador of Japan to the Republic of Trinidad and Tobago, His Excellency Tatsuo Hirayama, which took place today, Wednesday 6th January, 2021, at the Office of the Commissioner of Police, Police Administration Building, Port of Spain.

Mr. Littrean was recently awarded a commendation from the Ministry of Foreign Affairs of Japan, for his contribution to the promotion of Judo in Trinidad and Tobago.
Ambassador Hirayama said the Government of Japan wants to assist with the promotion of Judo in the TTPS since it will greatly benefit officers physically and mentally. He noted that training in the martial art is mandatory for all police officers in Japan and is widely adopted by police forces in Europe.

Mr. Littrean, meanwhile, said he envisaged a TTPS which is self-sufficient in training Judo to its officers, as well as to at-risk youths, since it can be a life-changing activity and turn them away from a life of crime.

Commissioner Griffith informed Ambassador Hirayama and Mr. Littrean that he is very interested in finding new ways for his officers to exercise restraint and not be confrontational in the execution of their duties. He said the use of Judo can form part of the Minimum Use of Force policy within the TTPS and it will give his officers a level of self-confidence while on the job.

He said that a pilot program will be rolled out at the end of January 2021 with 200 new recruits entering the Police Academy who will be trained in the martial art.
Commissioner Griffith and Ambassador Hirayama also exchanged gifts during their meeting.