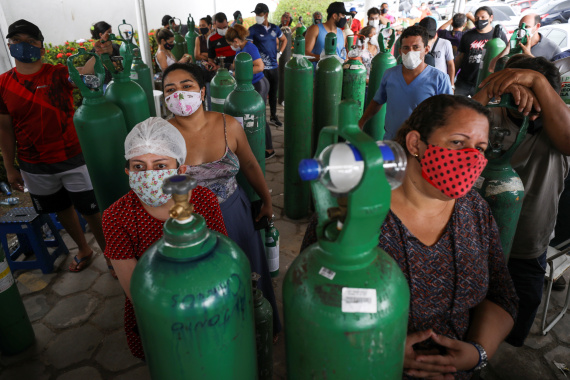 Brazil runs out of oxygen; in the battle to fight the new COVID-19 variant

Brazilian scientists are working hard to understand the new variant that was found in the Amazon. At the same time, doctors in the rainforest’s biggest city Manaus are struggling to control rising numbers of deaths from Covid-19 and soaring cases, as the country goes through a devastating second wave.

In a BBC report, Brazil has started vaccinating people, but with a collapsed health system in the Amazon, the light at the end of the tunnel feels a very long way away. BBC South America correspondent Katy Watson reports.

Hospitals in the Brazilian city of Manaus have reached breaking point while treating Covid-19 patients, amid reports of severe oxygen shortages and desperate staff.

Health professionals, warned “many people” could die due to lack of supplies and assistance.

Brazil has recorded more than 205,000 virus deaths – the second-highest tally in the world, behind the US.

A new coronavirus variant has recently emerged in Brazil, with several cases in travellers arriving in Japan traced back to the Amazonas region.