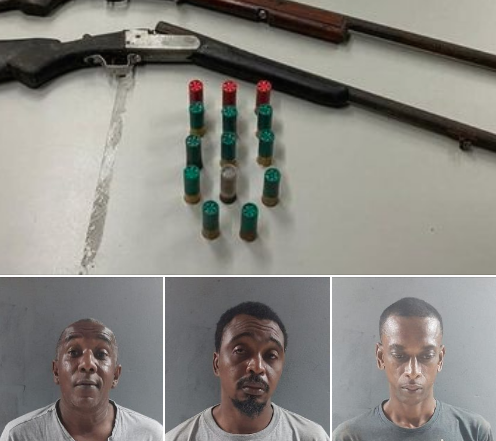 Three men who were allegedly caught trafficking two firearms and a quantity of ammunition on Friday are expected to appear before the a magistrate on February 1st, 2021.

The trio, CURT FERDINAND, 54, of Gonzales Street, Guapo, DARRYL GRANT, 38, of New lands Village, Guayaguayare, and DAVID RIQUE, 51, of Ferria Circular, Guayaguayare, will appear virtually before a Mayaro Magistrate on Monday, after being jointly charged by Cpl Neaves of the South-Western Division (SWD).

Cpl Neaves charged the three men with trafficking in firearms, possession of a firearm and ammunition.

The charges arose from an incident on January 29th in which SWD officers stopped a Nissan Almera in the Mayaro district where they allegedly found two homemade shotguns and 15 rounds of 12 guage ammunition.