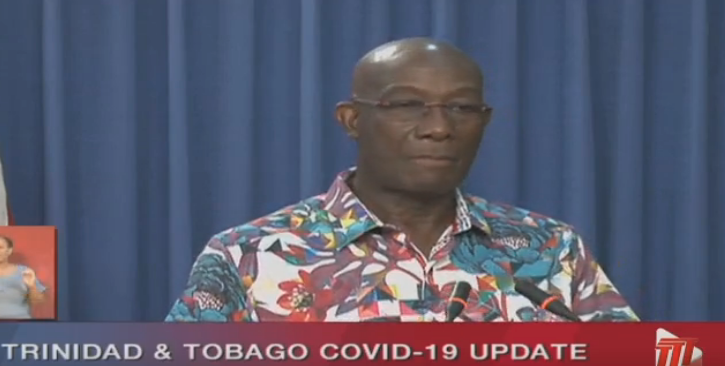 “Think about what you are risking!”

That was the appeal of Prime Minister Dr Keith Rowley on Saturday as he addressed a media briefing at the Diplomatic Centre in St Ann’s, to discuss the rising numbers of Covid19.

He said we have been in a relatively good position, but the actions of certain individuals could put us on poor footing and things could change very quickly.

Rowley also made an appeal to the Opposition Leader and every other leader, to speak to their flock and advise their followers to adhere to the Covid19 health protocols.

He said this long holiday period is an environment that is tailor made for people to behave in a certain way.

Rowley also stated that he has publicly called on the police “to do their jobs with greater enthusiasm to take us beyond the threat of the coming days, to ensure that those who are bent on ignoring the very fundamental response that we have, which is to NOT congregate, and of course that the public wears a mask, those two things, if you are out of your home environment, you are required to be masked.”

He added that everyone over adult age should be able to count and “if you find yourself in a group of more than ten, just understand that you are in a an ‘arrestable’ situation.”
“You need to be counting.”

Rowley also said that he has seen and confirmed that there are people who are breaching the regulations about the serving of alcohol in places where alcohol should not be served “We have good reason to believe that when you look at the map, the relationship between this kind of breach and what we are seeing on the map, we know that the police has the wherewithal to prevent that from happening.

Earlier in the press conference, Rowley warned of the consequences that could occur, “if we do not stay the course, as is required.”
He called on the nation to be more vigilant, and warned those that benefitted from government assistance during the first lockdown that there would be no assistance provided this time around if we were to return to such as a situation.
He said there are no resources to hand out cheques like that.