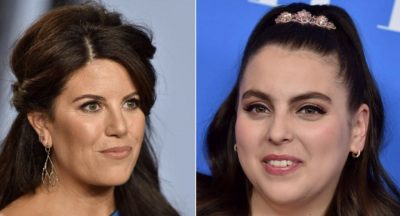 Lights Camera Action …The latest series of American Crime Story will air in the run-up to next year’s presidential election.
Lewinsky is among the producers on the FX show, which follows previous seasons devoted to the OJ Simpson trial and the murder of Gianni Versace.
Booksmart actress Beanie Feldstein will play Lewinsky in the drama.
Sarah Paulson, meanwhile, will play Linda Tripp, the civil servant who secretly recorded Lewinsky’s private phone calls about her affair with the president.
It is not yet known who will play Bill and Hillary Clinton in the show, which will be based on a 2000 book by Jeffrey Toobin.

We wonder if Hillary will be watching?

“In Fashion”: Who’s Fashionable at the US Presidential Inauguration?