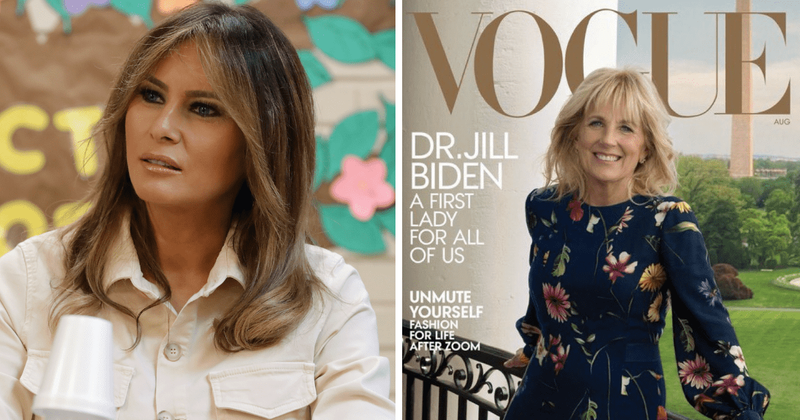 Melania Trump slams Vogue for not putting her on the cover

Former first lady Melania Trump has slammed Vogue editor-in-chief, Anna Wintour, for never putting her on the cover when her husband was president, in her first interview since leaving the White House.

Fox Nation host Pete Hegseth raised the topic in his sit down with Melania, noting that first ladies Jill Biden, Michelle Obama, and Hillary Clinton have all appeared on the cover of Vogue and that Vice President Kamala Harris got the honor even before she was sworn in.

“They’re biased and they have likes and dislikes, and it’s so obvious. And I think American people and everyone sees it. It was their decision, and I have much more important things to do—and I did in the White House—than being on the cover of Vogue,” Melania said.

It should be noted that the former model has appeared on the cover of Vogue, back in February 2005, when she was photographed in her wedding dress as she married Donald Trump.

Melania’s former fixer, Stephanie Winston-Wolkoff, has claimed the former first lady was offered a Vogue shoot shortly after Trump came to power, but refused to accept unless she was guaranteed the cover.

According to journalist Amy Odell’s new book Anna: The Biography, the Melania allegedly ignored Wintour during her 2016 visit to Trump Tower. Odell says Wintour arranged the meeting with Ivanka Trump and didn’t let her know she was coming. Winston-Wolkoff says was “so offended” that she “didn’t even say hello” to Wintour upon her arrival.

In an April 2019 interview with CNN’s Christiane Amanpour, Wintour was asked why she features more Democratic politicians than Republican ones.

“If you’re talking about the first lady [Michelle Obama] or Senator [Kamala] Harris, obviously these are women that we feel are icons and inspiring to women from a global perspective. I also feel even more strongly now that this is not a time to try—and I think one has to be fair, one has to look at all sides—but I don’t think it’s a moment not to take a stand… I think you can’t be everything to everybody and I think it’s a time that we live in a world, as you would well know, of fake news… [and] those of us that work at Conde Nast believe that you have to stand up for what you believe in and you have to take a point of view.”

Then in a July 2019 podcast interview with The Economist’s Anne McElvoy, Wintour refused to even acknowledge Melania as the first lady. Asked to name something in Mrs. Trump’s wardrobe that she admires, Wintour offered this response: “Well, I think First Lady Michelle Obama was really so incredible in every decision she made about fashion. She supported young American designers. She supported designers, indeed, from all over the world. She was the best ambassador this country could possibly have, in many ways, obviously way beyond fashion… ”

When McElvoy cut in to remind Wintour, “But she’s not the First Lady now. What about the one you have now?”

“And for me, she is the example I admire,” Wintour finished.

Other Republican first ladies, including both Laura and Barbara Bush, were denied the chance of a Vogue cover.

Celina Powell Claims Offset, Gucci Mane & Jason Derulo Made Her Get An Abortion 0

Hall of Justice to resume in-person activities on Wednesday 0