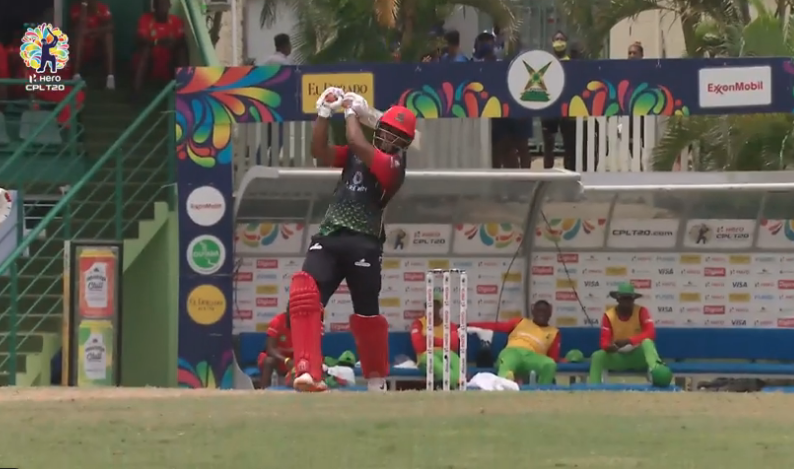 An opening partnership of 113 between Evin Lewis and Devon Thomas set the tone for St Kitts & Nevis Patriots’ chase of 147 against Guyana Amazon Warriors, resulting in an eight-wicket win with 1.1 overs to spare and a place at the top of the CPL 2021 points table.

Lewis showed the way with 62 from 39 balls, carting four fours and five sixes in an authoritative innings. Although Patriots had started cautiously with just 29 runs in the first five overs – three out of four fours had already come off Lewis’ bat until then – he made full use of the final over of the powerplay. Lewis swept and rammed Imran Tahir for two sixes in a row, and continued to enjoy the legspinner’s bowling.

When Tahir tossed one up in the eighth over, he went over the bowler’s head; and when Tahir went flat, Lewis cracked him over deep midwicket for six in subsequent overs. The bowler got a measure of revenge when he had Lewis stumped off a googly in the 14th over, but by then the Patriots were well on track for victory.

At the other end, Thomas stayed solid. Although on 11 from 26 balls at one stage, he broke the shackles by whipping and slapping Odean Smith for two fours. Next over, he launched Ashmead Nedd over deep square for six and eventually ended with 55 not out off 54.

That the Patriots didn’t have a big total to chase was down to Dominic Drakes, who finished with 3 for 26 in four overs. The Warriors had a rocky start, falling to 31 for 3. Odean, who had been sent at No.3 in their win against Trinbago Knight Riders, couldn’t replicate his success this time, falling for a seven-ball duck to Drakes. The bowler also snaffled Shoaib Malik, who struggled to 5 off 12, caught brilliantly by Joshua Da Silva behind the stumps, diving to his right. Da Silva was brought into the XI because Chris Gayle had a toe injury.

Chandrapaul Hemraj got things going for Warriors after the slow start, hammering Fawad Ahmed for six before clobbering Fabian Allen for four and six more. Although that Allen over cost 22, Hemraj fell to Fawad for 39 soon after; and at 82 for 5, Nicholas Pooran and Mohammad Hafeez remained the Warriors’ last recognised batters. Pooran deposited Fawad for three sixes in the 14th over and got 23 from just 10 balls before falling to Allen.

Hafeez propelled the Warriors in the final two overs, smashing Drakes for successive sixes and then clattering Dwayne Bravo for consecutive fours to drag his team to 146. It didn’t prove enough in the end.