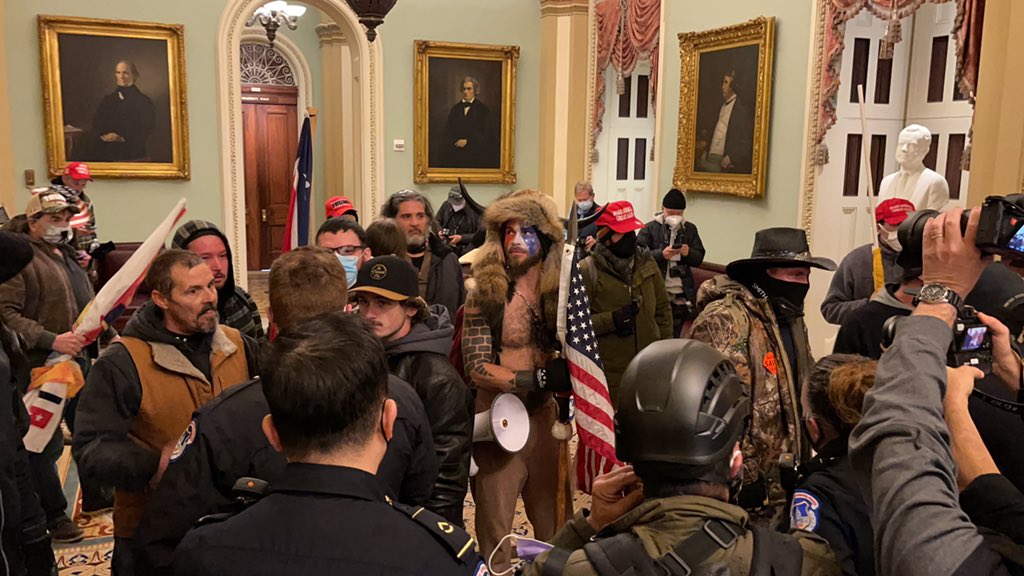 The heart of US democracy was plunged into chaos on Wednesday, as protesters supporting US President Donald Trump marched on Congress and forced lawmakers to be evacuated.

Vice-President Mike Pence left the floor of Congress as the US House of Representatives and Senate were forced into emergency recess and placed under lockdown. Outside, hundreds of protesters swarmed past barricades surrounding the building where lawmakers were debating Joe Biden’s victory in the Electoral College, eventually breaching security cordons and entered the Capitol building after clashing with police.

“Without objection the chair declares the House in recess,” congressman Jim McGovern said, banging down the gavel as loud shouts and disturbances could be heard in the public galleries in the chamber.

Officials at the US Capitol declared a lockdown, and lawmakers said on Twitter that they were sheltering in place in their offices, as protesters – some of them holding Trump flags – were seen walking through the building.

Earlier in the day at a rally, Trump said he’d “never concede” his election loss.

Loud booms were heard around the legislative building as police in riot gear undertook crowd control measures, including the use of pepper spray. Unconfirmed reports said tear gas had been deployed.

At the same time, a notice sent to staffers Wednesday at the Cannon House Office Building, across the street from the Capitol, told employees to “move in a safe manner to the exits” and “proceed immediately to your designated assembly area” following the bomb threats. The notice was later retracted.

As chaos unfolded, Washington Mayor Muriel Bowser ordered a citywide curfew. She set a 6pm (2300 GMT) curfew, set to to remain in place until 6am Thursday.

The developments come on a day of already high tension in Washington. Thousands of people have gathered in the city, including at a park south of the White House, in support of Trump as Congress prepared to seal Biden’s victory in the November election. In addition, the results from two runoff elections in Georgia suggest Democrats may retake the Senate, adding to frustrations felt by the president’s backers.