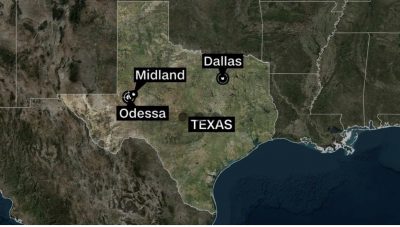 “Police in Texas are reporting at least one person dead and multiple gunshot victims” in West Texas after reports of two suspects opening fire in the area of Midland and Odessa.

Reports indicate one or possibly two suspects hijacked U.S. Postal Service the postal vehicle and was firing at random, hitting multiple people. “At this time there are multiple gunshot victims.

The Midland, Texas, Police Department said Saturday that another suspects was believed to be driving a gold-colored vehicle and has a rifle. The University of Texas Permian Basin campus has gone into lock-down.