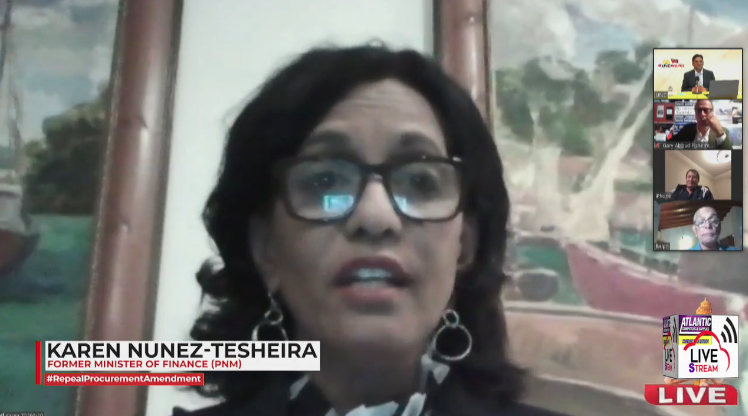 Former Minister of Finance, Karen Nunez-Tesheira, is urging citizens to join efforts to have amendments to the procurement legislation repealed.

Speaking at a Round Table and Webinar of the United National Congress on Monday evening, the former Finance Minister said she is expecting some backlash from her stance and where her comments were made.

However, the former finance minister said she is about ensuring the country’s interest is put first.

Environmentalist, Gary Aboud, urged citizens to understand the power they have and exercise it.

Former President of the Senate, Timothy Hamel Smith, said there must be proper checks and balances to ensure Trinidad and Tobago get value for money.

Loading...
Newer Post
Jamaican Woman Shot In Church For Telling Man To ‘Put On Mask’
Older Post
Life Won’t Return ‘Back To Normal’ For Up To 3 Years Until Pandemic Is Tackled Globally

Doctor under investigation for racist comments pleads for more time 0

Vigils, marches and motorcades to continue after Andrea’s burial 0