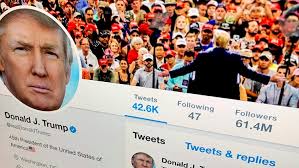 Twitter announced this Friday that it has permanently suspended the account in the social network of the outgoing president of U.S, Donald Trump, faced with “the risk of greater incitement to violence“for his part.

The company said that “after a detailed review of recent tweets from the @realDonaldTrump account and the context surrounding them, specifically how they are received and interpreted on and off Twitter, we have permanently suspended the account due to the risk of further incitement. to violence.

“In the context of this week’s horrific events, we made it clear Wednesday that additional violations of Twitter’s rules could result in this same course of action. Our public interest framework exists to allow the public to hear directly from officials. Elected and world leaders It is based on the principle that people have the right to be empowered to be openly accountable.

“However, we made it clear years ago that these accounts are not completely above our rules and cannot use Twitter to incite violence, among other things. We will remain transparent about our policies and their enforcement.”

Facebook and Instagram They have already blocked Trump indefinitely at least until the handover of power ends.

The social network had already punished the president without tweeting after the Capitol riots on Wednesday.