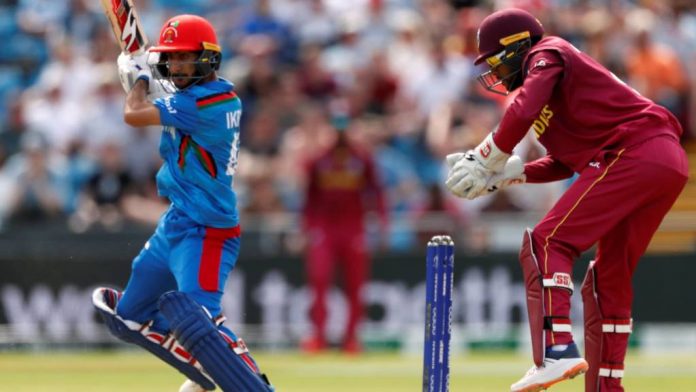 West Indies were dealt a heavy blow in their buildup to Wednesday’s opening One-Day International when they slumped to a shock four-wicket defeat to an Afghanistan XI in a one-day warm-up match on Monday.

In their first and only preparation game before the limited-overs series, West Indies’ batsmen yet again failed to produce anything of real worth after collapsing to 156 all out in the 39 overs, and then watched as the hosts chased down the modest target with over 15 overs to spare at the Atal Bihari Vajpayee International Stadium.

Roston Chase was the foundation of the Windies’ effort with a top score of 41 while former captain Jason Holder chipped in with 31 and Evin Lewis, 24.

West Indies were in dire straits at 12 for three in the sixth over after Naveen knocked over Shimron Hetmyer and Brandon King both without scoring, and opener Shai Hope perished for one.

The left-handed Lewis tried to repair the damage in a 24-run fourth-wicket stand with Nicholas Pooran (20) but he was fourth out in the 11th over after striking four fours in a 35-ball knock, caught at the wicket off 21-year-old pacer Karim Janat.

When Naib removed Pooran and captain Kieron Pollard (3) in successive overs, West Indies were tottering on 64 for six in the 18th over.

Chase and Holder then came together to provide the first sign of resistance, adding 47 for the seventh wicket to get West Indies past three figures.

Chase faced 52 balls and hit four fours while Holder belted a four and a six in a 43-ball stay at the crease.

Naveen returned to break the stand when he bowled Chase in the 28th over and his dismissal signalled the end of all resistance as the last four wickets tumbled for 45 runs.

Needing early wickets in defence of a small total, uncapped fast bowler Romario Shepherd (3-16) wreaked havoc at the top, removing both openers Hazratullah Zazai (1) and Javed Ahmadi (9) cheaply as the hosts limped to 12 for two in the fourth over.

And once Ikram Alikhil followed for one in the seventh over, the Afghanistan XI were up against it at 23 for three.

But they staged a daring recovery, Rahmat Shah hammering a top score of 47 off 76 balls with six fours in a 55-run fourth wicket stand with Najibullah Zadran whose 44-run 40 included seven fours.

Fast bowler Alzarri Joseph accounted for Rahmat in the 21st over but even then, Zadran found an ally in Asghar Afghan, whose 33 not out off 35 balls helped him put on a crucial further 35 for the fifth wicket.

Leg-spinner Hayden Walsh Jr, in his first appearance in maroon colours, broke the stand when he bowled Zadran in the 27th over. However, any last-ditch hopes of a Windies win were dashed as Asghar and Mohammed Nabi (18) added 34 for the sixth wicket to erase any doubt over the result.